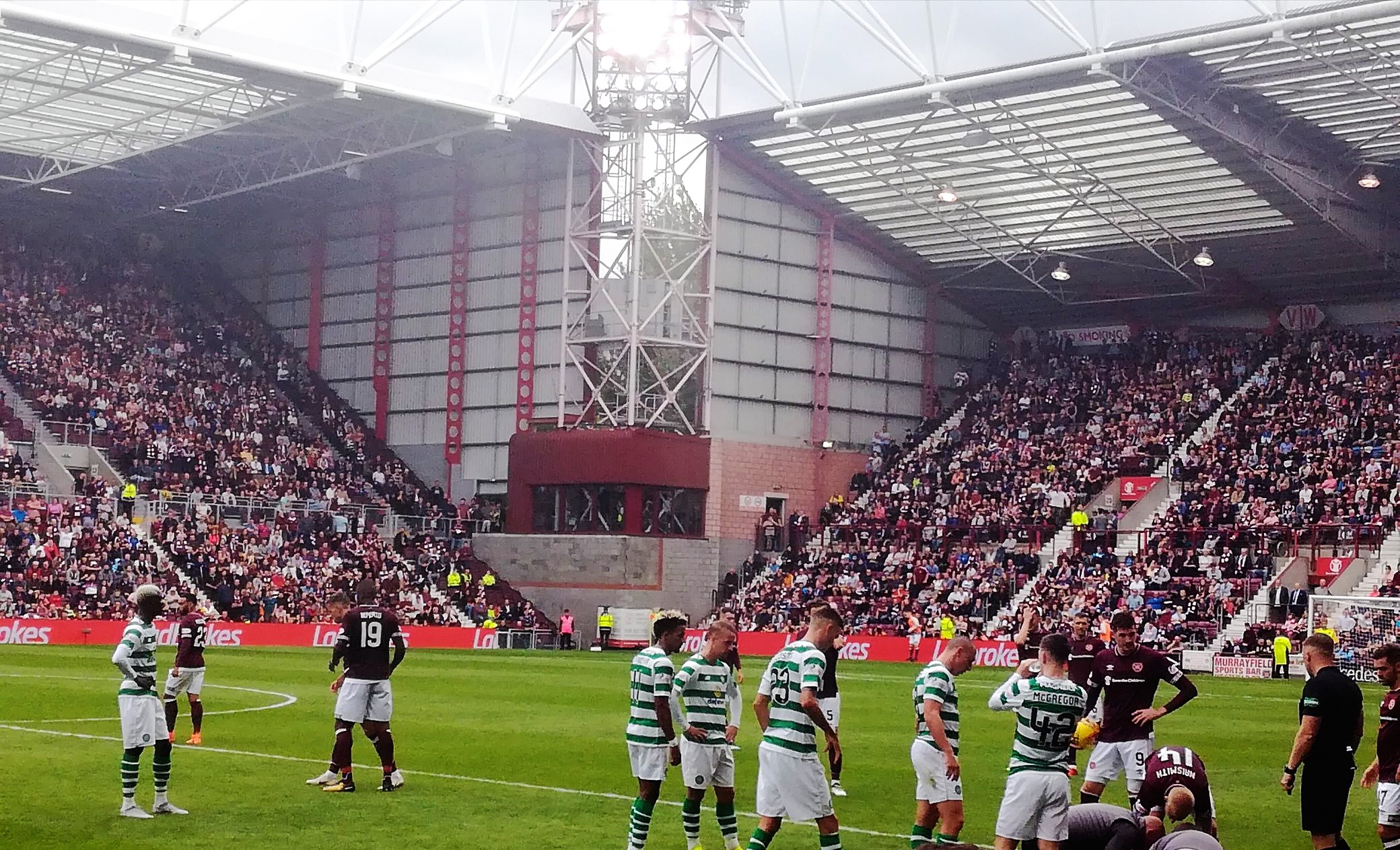 Hearts maintained their unbeaten start to the season in some style when they defeated league champions Celtic at Tynecastle Park on Saturday – the second time they have done so in Gorgie in the last eight months.

Kyle Lafferty scored his first goal of the season and this was enough to keep Hearts 100% league record – and their place at the top of the Ladbrokes Premiership.

More than 19,000 were at Tynecastle on Saturday lunchtime creating the usual raucous atmosphere when Celtic come to Gorgie.

With a frenzied atmosphere inside Tynecastle it was the home side who had the game’s first decent chance when Uche Ikpeazu drifted past Simunovic before crossing for Lafferty, but the former Norwich City striker’s header didn’t trouble former Hearts keeper Craig Gordon.

Hearts players and supporters were screaming for a penalty kick when Steven Naismith went for a cross delivered by Jake Mulraney and appeared to be pushed in the back by Simunovic. Penalty screamed Naismith and 16,000 Hearts supporters but referee John Beaton was having none of it.

In the 16th minute, Ikpeazu showed his strength by fending off the challenge of Hendry to set up Naismith but the former Killie striker’s effort on goal wasn’t strong enough to trouble Gordon.

Brown then had a chance for Celtic, but he screwed his shot wide before he fired another effort high and wide moments later.

The champions should have gone in front right on the stroke of half-time when Griffiths danced past several Hearts defenders before firing home what he thought was the opening goal. However, Hearts defender Michael Smith cleared the effort off the line. The relief among the home contingent was tempered somewhat when captain Christophe Berra had to be stretchered off moments later with what appeared to be a serious leg injury.

Celtic manager Brendan Rodgers may have had words to say to his team during the interval because they started the second half in determined fashion. Lustig shot over the crossbar before Griffiths was denied by Hearts keeper Bobby Zlamal.

In the 57th minute Tynecastle erupted when Hearts took the lead with a brilliant goal. Ikpeazu did superbly on the right to cross for Kyle Lafferty to volley home a superb shot low into the net and Hearts were ahead against the league champions.

Having already hit the heady height of two goals this season, Michael Smith almost got his third with a fierce effort on goal which went narrowly over the crossbar. Then, Olly Lee – with his dad Rob, the former England international watching from the stand – came close to doubling Hearts lead with an effort which Gordon did well to stop.

Celtic never know when they are beaten, however, and Rogic fired in an effort which whistled past keeper Zlamal’s post.

Hearts hung on for the win to the joy of the home support, savouring another victory over Celtic in Gorgie.

Craig Levein was, naturally, a happy man after the game. He told the official Hearts website:

“Today proved we can be competitive, and we edged the match, but it’s too early to say what we can do. The squad is better balanced, for sure. Some of the new players have hit the ground running, some haven’t, but when we get everyone up to speed, we can look at what we’re capable of. Today, I just want to enjoy the result.”

“I wouldn’t fancy a game against Uche Ikpeazu. He ran himself into the ground, he was unselfish. He occupies two and three defenders at a time, and he was fouled a lot but because he’s so strong, the referees think he’s the one doing the fouling.

“I don’t want to have to tell him to throw himself to the ground to get fouls! He wants to score a lot of goals, but his touch and link up play was excellent too and assists like today and last week for Steven MacLean enhance his profile as much as goals will, both for himself and for the club.”

“The injury to Christophe is a big worry. It looks like his hamstring, I don’t know how bad it is, but it doesn’t look great. He got caught trying to avoid Ben Garuccio when he was tracking Leigh Griffiths, so we need to wait and see.

“What I thought was significant was how John Souttar took the armband and led the team like Christophe does. He took responsibility, and he was outstanding.”

Hearts decent start to the season continues and they inflicted another uncomfortable afternoon on Celtic manager Brendan Rodgers. It’s worth noting that the only teams to beat Celtic twice under Rodgers leadership have been Barcelona, Bayern Munich, Paris St. Germain – and Hearts.