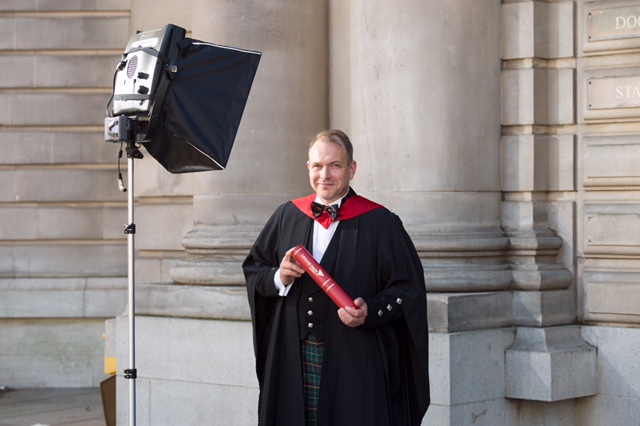 A former Royal Marines Commando has driven a taxi for nine years to pay his way through university as he bids to become an established TV documentary maker.
Edinburgh Napier mature student Matt Jones, 51, has got behind the wheel of a black cab nearly every night to fund his studies and buy his own film studio and equipment.
His dedication and years of sacrifice paid off on Thursday as he joined classmates at a ceremony in the Usher Hall to graduate with a First Class BA (Honours) in Television. Matt said: “The TV course has been a brilliant journey. Colleagues often ask where I find my energy, and sometimes I have to ask myself the same thing, especially at 4am when I have forgotten to go to bed. Perhaps my endurance and resilience comes from my 12 years as a commando.
“There have been sacrifices, the biggest of them being to have had no social life throughout this time, but I am passionate about television and I am now talking to production companies and hoping to make my mark in the documentary genre.
“It was easy to feel envious of weekend revellers partying in the back of my taxi, but I went home with money in my pocket to pay for my education.

“Taxi driving and interacting with customers also allowed me to refine my interview skills, and I occasionally picked up customers from the TV and film world, including Angus Deayton, Ian Lavender, Paul Merton, Alexei Sayle, Ruth Madoc and Steven Berkoff, who had an influence on my chosen career.”

Matt – the uncle of the Scotland rugby team’s Calcutta Cup double try scoring hero Huw Jones – joined the Royal Marines Commandos as a teenager, seeing active service in Northern Ireland, The Gulf and on anti-drugs and anti-piracy missions in the Caribbean, Indian Ocean and South China Seas.
Even as a young man he was creating films and training videos, and the TV bug never went away as he went on to run his own businesses.
The nine years he has spent driving taxis, as well as supporting his studies and his three sons, have enabled him to build his own film studio and edit suite at his home in Longniddry, East Lothian.
He has already completed a music production with National Museums Scotland for a new exhibition on Scottish pop from the 1950s to present day.  Classical music enthusiast and trumpet player Matt has also worked on a documentary about Felix Mendelssohn and is currently working on Fryderyk Chopin.
Now, following his graduation, he can’t wait to get his documentary career under way in earnest.
He said: “Whilst studying I have been coached and trained by lecturers who are well-known in the industry, and it has been wonderful to benefit from their experience.
“I am now in the process of sitting down with production companies, and looking forward to establishing my own name as a documentary maker.”
The Jones family have not finished with Edinburgh Napier though. Matt’s youngest son Louis, 18, has just completed his first year of a degree in Building Surveying, and his middle son, Oliver, 21, has also just completed a three-year Fine Arts course with the Atelier School in Leith.
Dr Kirsten MacLeod, programme leader for BA (Hons) Television, said: “Matt has been an enthusiastic and committed student who has really made the most of his time at Edinburgh Napier to expand his knowledge and skills and to gain work experience.
“His background informs his approach to production and we wish him every success for the future.”