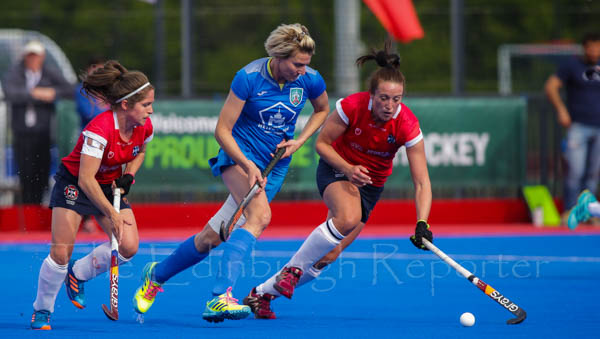 Day I Success for Hosts, Edinburgh First match up was a Pool B match up between CUS Pisa from Italy and Belgium’s Braxgata HC. Braxgata were on top right from the start with the Italian squad barely able to get out of their own half . Three goals in quick succession in gave the Belgian side a 3-0 lead at the end of the first quarter. The second 15 minutes were more of the same, with another three goals – the final one being from a penalty corner on the whistle.

Pisa came more into the match in the second half and forced a couple of saves from the Braxgata keeper, but a third set of three saw Braxgata over the line at 9-0. Second match on the pitch was between Gintra Strekta Uni HC from Lithuania and Milne Craig Clydesdale Western from Scotland. Western started the match the better of the two, but Ginstra kept them honest and the teams were fairly evenly matched.

However discipline let the Lithuanians down and two penalty corners, the second on the 15 minute mark, saw Western ahead 2-0. Ginstra scored with a penalty corner early in the second half for 2-1, but the Glasgow side made sure it was a short lived one-goal difference with a third goal three minutes later.

A fourth seven minutes from time for Western was followed by a third for Ginstra a minute later.

Despite late pressure from the Ginstra, including a series of penalty corners, they couldn’t add to their score and the match finished 4-3 to Western. Third match, and the first of the two Pool A matches, was between Swansea City from Wales and Rorweiss Wittengen from Switzerland. Two first quarter goals within a minute kept the teams level until the Swiss scored from a penalty corner 18 minutes in.

Swansea equalised in the 48th minute via a, rare, penalty stroke, before pulling a goal clear from a well struck penalty corner with four minutes to go, but Wittengen put away a PC awarded a few seconds from time. Final match of the day involved the hosts, Edinburgh University, and Russia’s Metrostroy. With both sides fielding a number of International players, this was anticiapated to be the match of the day. And so it proved. Metrostroy put Edinburgh under a huge amount of pressure for most of the first quarter, but it was the home side who went into the first break a goal ahead from a deflected strike.

Edinburgh then started to come back into the game in the second quarter, and scored from a penalty corner for 2-0, before turning the tables on their opponents. They dominated the rest of the match, despite Metrostroy having a bit more of the game, but a 43rd minute goal saw them extend their lead.

The Russian side piled on the pressure late in the game, but couldn’t find the net and the match ended 3-0 to Edinburgh.