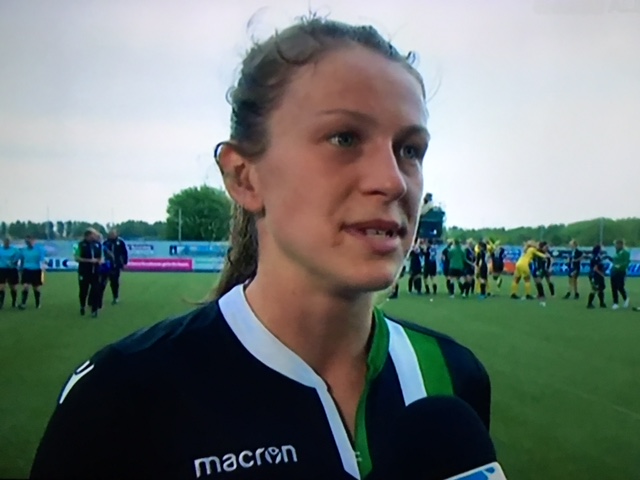 Lizzie Arnot scored an incredible five times during Hibernian’s resounding 9-0 victory over Celtic in the SWPL Cup Final at the Falkirk Stadium but modestly insisted that the plaudits belonged to her team mates.

The 22-year-old who missed the majority of last season with an ACL injury helped Hibs claim a second successive domestic cup double with a sparkling performance and is now turning her attention to retaining the Scottish Cup and ending Glasgow City’s 11-year grasp on the league title.

Speaking to  Hibernian Ladies’ Twitter Account Lizzie said: “I didn’t wake up thinking that I would be scoring five goals in the final. It’s obviously good just to help contribute and the girls who set me up done well, I was just in the right place at the right time. It’s just good that I am back and contributing to the goals.”

“Everyone played so well and it was good that we were so dominant throughout”, expressed the winger. She continued: “We kept the pressure on from the first whistle right to the end.

“To get four goals in the first half was great, and to get that early one in the second half just spurred us on even more. It was great from everyone today.

“I wouldn’t say that I’ve been involved in a more complete performance with the team. Everyone was right on their game. Things seemed to go right for us and fall into place.

“I can’t think of another performance that has gone as well as that, especially in a final.

“We want to keep that consistency up and we really want to push on to try and win the Scottish Cup again and also the league.

“As a team, it’s important for us to keep trying to win trophies, so that’s our aim and hopefully we can.

Hibernian are next in action on Sunday 27 May at 1pm against Rangers at Ainslie Park in the SBS SWPL.