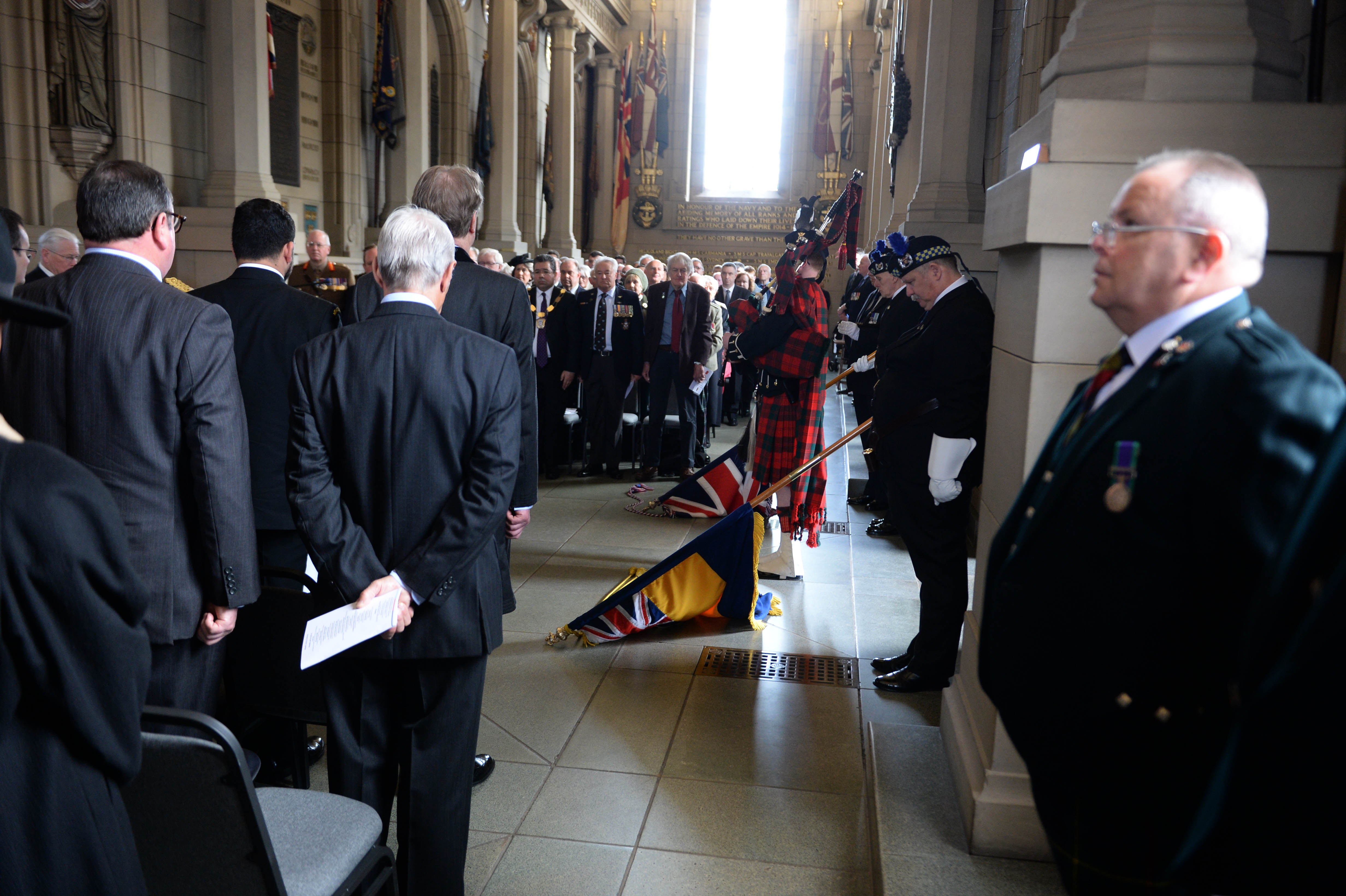 Earlier today representatives of all sides attended the remembrance service at the Scottish National War Memorial at Edinburgh Castle organised by Legion Scotland.

Anzac Day is observed each year on this day, 25 April, to honour the Australian and New Zealand Army Corps who fought at Gallipoli during WWI. Now it is used to remember all of those who have fought and died in all conflicts, including those from Turkey who fought during the same conflict.

James Potter (67) originally from Broxburn, went to Australia with his family in 1966 aged 15 and he spent six years in the Royal Australian Air Force (RAAF). His father had made the appointment for him to be interviewed when he met the commanding officer in charge of recruitment in Perth. James laid a wreath on behalf of Australian veterans. He said : “It changed my life. I was informed that the Forces looked at aptitude and attitude, and once they got me in they could do what suited us both best. After ten long weeks of basic training – early mornings and lots of shouting – I came out a pile of clay ready for moulding – and mould me they did!”

Speaking about today’s service, he said: “ANZAC Day is an emotional rollercoaster for me. I feel it’s a commemoration, not a celebration; a time for reflection to remember old mates and to make new ones; and a time for a laugh, a joke, a tear and a beer.

“It’s a day that gives me the chance to sit quietly and recall my time in the RAAF. I also remember with pride the country that welcomed a young Scot and taught me how to look after myself, be self-sufficient, the importance of being part of a team, and how to trust depend on others and have others trust and depend on you.”

James added: “I would like to ask people to take moment and think of all the Scots, from the 1800s to the present day, that have emigrated to Australia, and decided to serve with the various branches of the Australian Defence Force, Air Force, Army and Navy, and who embraced their adopted country and were welcomed into the brotherhood and traditions of the ANZACs. Australia is a land that I love and am proud to have served; she is my spiritual home.”

Consul General Turgut, from the Turkish Consulate General in Edinburgh, said: “Gallipoli is a scene and a picture that showed everything about the whole First World War. Every year, we commemorate the sacrifice and courage of our ancestors, who were separated by language, culture and religion, and who fought at Gallipoli.

“Many nations have little in common, except for the importance of Gallipoli in their history. Today, more than a century later, we regard Gallipoli as a central event in our modern history. Gallipoli, a shared battlefield that unites former enemies, is an example of peace and friendship after the war among nations.”

Kevin Gray MM, Chief Executive Officer of Legion Scotland, said: “As the custodians of Remembrance in Scotland, our involvement in services of commemoration like we’ve delivered today is so important and allows all members of our communities to join together to remember those who paid the ultimate sacrifice, or who returned from battles in foreign lands with life-changing injuries. We will remember them, and as we bring together a plethora of nations and organisations at today’s service, our enduring message of comradeship comes very much to the fore.”

It is estimated that around 10 per cent of those who served in the conflict were British. Other wreaths were laid by the Lord Provost of the City of Edinburgh, a representative from the Scottish and UK Governments, the Australian High Commission, the New Zealand Honorary Consul Scotland, the Government of the Republic of Turkey and Royal British Legion Scotland.