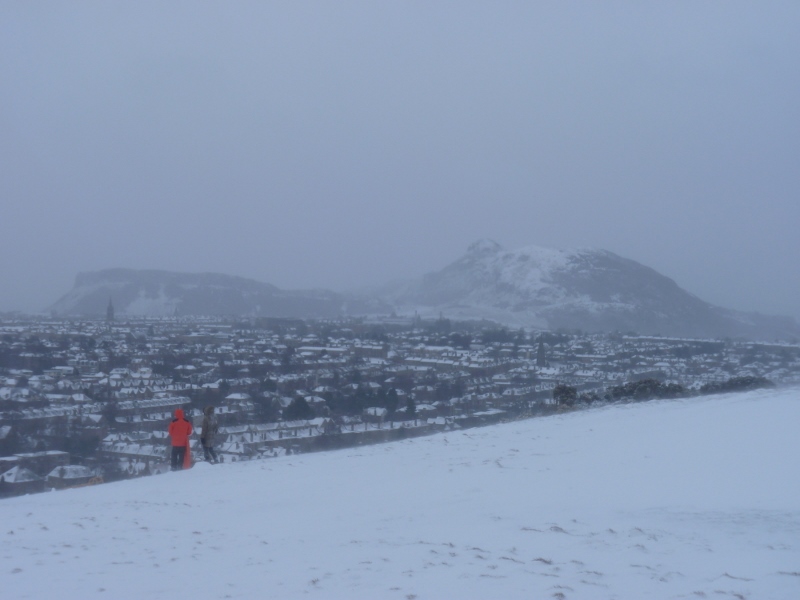 It may be early spring, but Scotland has been stopped in its snow-tracks by “the Beast from the East”, a sabre-toothed wind and snow, blowing in from Siberia.  This is probably counted as a mild spell by the hardy folk of Irkutsk but it has felled us Scots.

As I write, the latest shower is howling at my window. I’ve just beaten a retreat from tying to clear the four inches of snow lying on the pavement outside my house.  The temperature has dropped to minus 4 C but the biting east wind makes it feel colder. On the radio, we’re being told not to travel anywhere in Central Scotland – there are no trains, no buses, no airports open, all the schools are shut.  On Wednesday night a thousand cars and lorries were stuck for hours on the M80 near Stirling.  There are fears that the gas supplies which heat our homes are running out. There were no newspapers in the shops this morning. Sports events and concerts are being cancelled. The sky has fallen in, this is Armageddon.

But actually, the unusual weather (the worst for eight years) is only affecting the central belt. Along the west coast and in the Highlands things are not so bad. And we have had several days’ warning from the Met Office that the “beast” was on its way. So I’m wondering if we should rethink our tactics when faced with these occasional snowy conditions.

Instead of spending a fortune on snowploughs and salt, perhaps we should just close the motorways when heavy snow is forecast.  We could just leave motorists to try their luck on uncleared roads and rescue them when they get into trouble.  It’s clear that many people on that M80 ignored police and government advice only to travel if the journey was absolutely necessary.  There were empty lorries, people going to meet friends etc. Not everyone was a nurse or doctor trying to get to their shift in the emergency department. Perhaps we should pass a law which forbids employers deducting pay from workers who don’t turn up during severe weather alerts.

In other words, we should just lie down in front of the beast from the east and let him run over us. There are good sides to a few quiet days in the snow. There’s a renewed spirit of comradeship. People mumble “hallos” as they slither past each other in the street.  On the M80, people living in houses nearby climbed over their garden fences to offer food and warm drinks to the stranded motorists. Children and parents, carrying sledges, were heading for the parks as I trudged through the snow to my music lesson this morning.

We all got a chance to “chill”, to forget the usual round of news.  Like the Scottish Government launching its own “EU Withdrawal Bill”. No, Nicola Sturgeon hasn’t changed her mind about staying in the European Union.  This is a bill which seeks to reclaim all devolved powers as they return from Brussels in the event of Brexit actually taking place next year. It would, she argues, prevent the UK Government mounting a “power grab” over issues like agriculture and environmental standards.  There is some doubt over whether the bill is lawful under the Scotland Act relating to devolution but, as it’s being used mainly as a political weapon, its legality doesn’t really matter.

What’s not in any legal doubt anymore is the Scottish government’s minimum price for a unit of alcohol.  On 1st May Scotland will become the first country in the world to introduce a minimum price for alcohol.  This week the minimum price was confirmed as 50p per unit which will increase the cost of a cheap bottle of cider by three times to over £11 which is aimed at reducing binge drinking by young people – one of the saddest aspects of Scotland’s major problem with alcohol.  The drinks companies don’t like it, of course, and they held up its introduction for six years while they fought it in the courts as being “an interference in trade.”

Now it is being introduced, we are all waiting to see what effect it has, though some experts are warning that the minimum price should be 70p rather than  50p to have the required impact. But, like the pioneering ban on smoking in public places, it’s aimed at changing the culture of the country and the figure can be increased at a later stage if necessary.

We learned this week that Ryanair is cutting its 17 air routes out of Glasgow airport to just 3 (keeping the Dublin route, of course).  It blames the Scottish government’s failure to keep its promise to halve air passenger duty. The government says it still intends to cut the duty by 2021 but it cannot do so at the moment because of uncertainty over Brexit.  Well, it’s a handy excuse for doing the right thing in my view.

Finally, we are still walking on the snowy air over Scotland’s rugby team’s 25-13 victory over England last weekend.  It’s our first win over the auld rival for a decade and predicted in this column.  Now for the match against Ireland and again I’m predicting a win.  But I suppose, hopes can disappear quickly, like snaw aff a dyke in the spring.