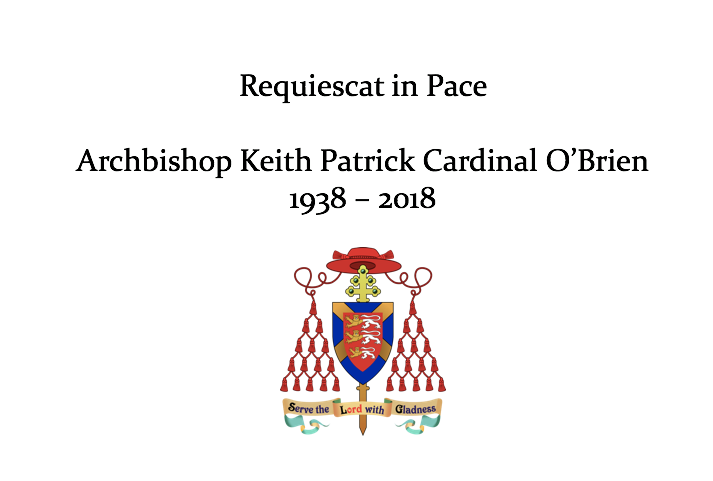 Cardinal Keith O’Brien who was Scotland’s last cardinal has died in Newcastle upon Tyne in hospital.

There were reports over the weekend that his successor Leo Cushley,  the Archbishop of St Andrews & Edinburgh, had visited him and given the retired cardinal the last rites.

This morning the diocese made the announcement of Cardinal O’Brien’s death on their Facebook page :

Cardinal O’Brien was a familiar figure at many events around the capital, but resigned in 2013 following allegations of sexual misconduct involving three priests and a former priest which he admitted. He resigned saying that his behaviour had ‘fallen beneath the standards expected of me’.

Born in Northern Irelan,  he studied at the University of Edinburgh.

At the time of his elevation to cardinal in 2003 the then First Minister Jack McConnell said at the National Thanksgiving Mass celebrated in the cardinal’s honour : “Your Eminence, Ladies and gentlemen, it is a great privilege to be here today at this National Thanksgiving mass. The elevation of Keith Patrick O’Brien’s to the College of Cardinals is indeed an occasion for national thanksgiving.

“It is a great personal honour for Cardinal O’Brien to be the only the third Scottish Roman Catholic clergyman to become a Cardinal since the Reformation. His appointment is a measure of the high esteem in which he is held by everyone in the Church and beyond.”

By Gavin Scott at English Wikipedia – Transferred from en.wikipedia to Commons, Public Domain