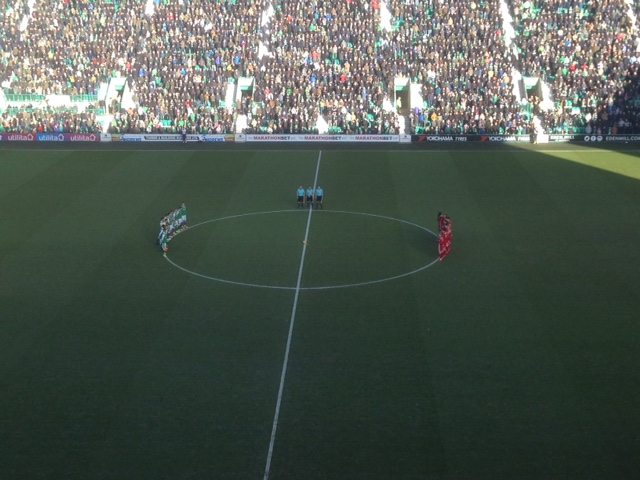 Hibs’ fans will hold a minute’s applause tomorrow ahead of the match against Aberdeen in memory of former player Liam Miller who sadly died aged 36 from pancreatic cancer earlier this month.

The Hibernian players will wear black armbands and in the match programme you will be able to read an article from former team-mate Danny Galbraith.

Both side of the Edinburgh divide paid tribute to the Republic of Ireland international on social media with threads on both Hibs.Net and Jambo Kickback.

Tributes poured in from football fans of all persuations  along with numerous former team mates including his friend Tam McManus who tweeted: “I’m afraid it is true that Liam Miller has sadly passed away today. Thoughts are with all his family and friends at this horrendous time. So sad.”

He described Miller as “a wonderfully talented player but more importantly a lovely, humble person who never changed despite the wealth and success”.

Liam grew up in Ovens, a village in County Cork where he played Gaelic football but his real passion was soccer.

He began his career at Celtic and made 26 appearances for Martin O’Neill’s side before joining Manchester United in 2004.

After struggling for regular first-team football he moved two years later to Sunderland for whom he played 57 times in three years before a two-year stint at Hibernian under John Hughes.

Liam actually played more games for Hibs than any other club during his career.

He later played in Australia for Perth Glory, Brisbane Roar and Melbourne City before returning to Ireland to play for his hometown club Cork City in 2015.

He also played 21 times for the Republic of Ireland, scoring once.

Miller, who played for Celtic, Manchester United, Sunderland and Hibernian during a senior career spanning 16 years from 2000, had been diagnosed with pancreatic cancer in November 2017.

Scottish football legend Sir Alex Ferguson said: “I am very sad to hear that Liam has died.”He was a good professional, who served our club in an excellent manner. He was a quiet, unassuming young man and was popular with everyone at Carrington.

“On behalf of all my staff who worked with Liam at the time, we send our deepest sympathy to his family”

Liam’s funeral took place at the Church of John the Baptist in Ovens on Monday 12 February 2018 and was attended by many former team mates and managers including Martin O’Neill and Roy Keane.