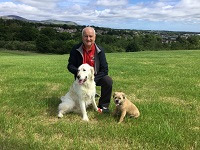 The Labour Councillor represented Penicuik for over 31 years on both Lothian Region and Midlothian councils.

Midlothian Council Leader, Councillor Derek Milligan said: “It is with huge sadness that I have to announce Adam’s death.  Adam was not only a Labour colleague but a great friend.

“During his three decades as a councillor, he worked tenaciously both for local people in his ward and the wider community in his role as Provost.

“His experience, commitment, warmth and enthusiasm and indeed his dry sense of humour will be greatly missed.

“Our sincere condolences go to his wife Karen and three children, Scott, Mairi and Ross.”

Edinburgh’s Lord Provost, Frank Ross, said: “I was saddened to hear the news of Provost Montgomery’s passing. A long-standing elected member for more than 30 years and my counterpart in Midlothian, he was well-respected by many in local politics and across Scotland. On behalf of everyone in Edinburgh, our thoughts are with his family, friends and colleagues at this difficult time.”

As a mark of respect, the flag at Midlothian Council is flying at half-mast.

Cllr Montgomery, who also has three grandchildren, was originally from Ayrshire. However, he lived in Penicuik, which he said was in his “heart and soul” for 36 years.

During his service, Cllr Montgomery who was Council Leader from 2003 to 2007, took great pride in the council’s affordable homes building programme. He was also involved in decisions to build new schools and refurbish buildings, including Penicuik Town Hall.