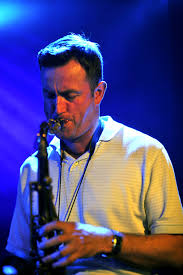 Saxophonist Tommy Smith brings his latest project home this month with a concert on Saturday, 11 November 2017 in Craiglockhart church just two miles from where he grew up in Wester Hailes.

Back in the summer Smith stepped out onstage at Rochester Jazz Festival in New York to play his first ever “naked saxophone” concert, an experience he found “scary but exciting”. He had played onstage by himself many times before. In the early noughties he toured his Alone at Last project across the UK and further afield, playing soprano and tenor saxophones and integrating recordings of his late friend and collaborator Edwin Morgan’s poetry with samples of natural sounds and special effects. He has also recorded alone, on his 2001 album Into the Silence, which saw him working with what was at one time the longest echo in the world in Hamilton Mausoleum.

The Rochester concert, however, was his first time “playing with no help”, as he puts it, in front of an audience and the response in the church-like ambience of Rochester’s Lyric Theatre, and in later reviews, told him his approach was on the right track.

“I’ve seen some great saxophonists playing completely solo and even someone like Michael Brecker, who used awesome virtuosity and fantastic technique to prolong his compositions in that setting, played too many notes,” he says. “It’s a really big challenge and there’s the temptation to fill the space available because you’re exposed by the silence, but to me
space is important. It gives you time to reflect on what you’ve just played and what you’re about to play. It lets the music breathe. If you just play constantly, for the audience it’s like listening to someone talking non-stop, twenty to the dozen, and that can just get annoying.”

Smith has since played another successful solo concert, in the aptly named “round church” in Bowmore during Islay Jazz Festival, and is keen to do more. When the minister at Craiglockhart offered his church as a venue, Smith jumped at the chance to play solo so close to his old home.

“It wouldn’t suit every venue,” he says. “But churches, particularly the older ones, were built to accommodate acoustic music and I really enjoy working with the sound of the room. I concentrate on melodies, some of Duke Ellington and Billy Strayhorn’s, some from Scottish folk music and some of my own, and although it is like walking a tightrope, playing without a band, it’s really satisfying.”

The solo concert, the first of a new Jazz in the Church series at Craiglockhart, follows a successful concert by  Smith’s new quartet in Musselburgh last month. Tickets £10 available from the church or by email gordonkennedy@craiglockhartchurch.org

He returns with the quartet to Edinburgh early in the new year for a concert at The Queen’s Hall on 28 January 2018. .