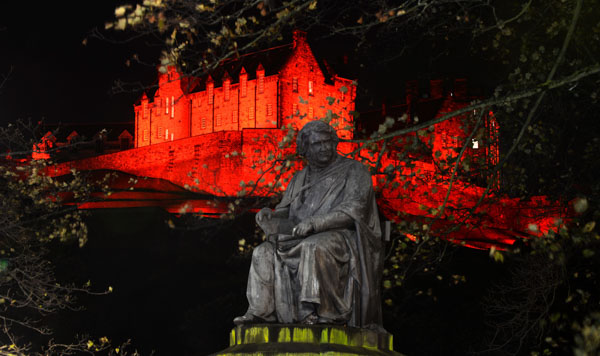 Edinburgh landmarks lit up for Charity

Landmarks across Edinburgh are joining a host of Scotland’s most famous buildings, structures and sculptures, in lighting up Poppy red to raise awareness for the annual fundraising campaign run by Poppyscotland. Edinburgh Castle, St Giles’ Cathedral, The Balmoral clock tower, the Royal Yacht Britannia, Edinburgh Airport control tower, EICC and Scottish Government buildings Victoria Quay and St Andrews House, will turn the capital red in a powerful and visual show of support for the Scottish Poppy Appeal.

While the ‘Light Up Red’ campaign has been running for six years, 2017 has seen the most support yet with over 30 iconic landmarks taking part to support this year’s Scottish Poppy Appeal.

Gordon Michie, Head of Fundraising at Poppyscotland, said: “It’s fantastic to see Scotland lighting up red once again for the Scottish Poppy Appeal, and we’ve been blown away by the country’s support.

“We hope that when people see a wonderful iconic structure across the Edinburgh skyline glowing red over the Remembrance weekend they will think about the many ways they, too, can go the extra mile in their support for this year’s Poppy Appeal.

“Whether it’s putting a little bit more in the Poppy tin, or doing something completely different to raise money, every penny helps us to offer life-changing support so we can be there when they call for backup.” Stephen Preston, Acting Head of Heritage and Culture at St Giles’ Cathedral, said: “For us at St Giles’ it is important to light up red as part of a city-wide effort to increase the visibility of the poppy and what it represents.

“The centenary of the First World War impresses upon us the significance that we should not forget that ordinary men and women gave their lives and well-being and if by lighting up red we can encourage the people of Edinburgh remember those people who were forced to become extraordinary, then we have achieved our goal.”