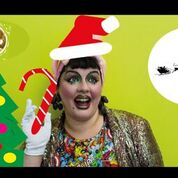 Those of a nervous disposition – look away now!

A Drag Race of super-queeroes are coming to paint the Town red (and green, with fluffy little snowflakes as well – elf & safety permitting.) Just when you thought they would never go away – they just come back cocking a snook and snooking a cock-a-doodle,‘Don’t stick labels on us.’ (Unless you lick them thoroughly first with a suggestive rasp). Decadent in the thralls of Christmas jolly, the gender-blind inclusive warriors of wassail, wickedry and goose-sausing identity iconoclasm, nu-role revolutionaries, Dive Queer Party in association with Traverse Theatre presents: The Miss Annabel Sings Show:  Camp As Xmas Cabaret

Be nobbled by the deliciously peacock-preening nom de plume, under-the-counter culture, characters such a Sadie Godiva, DJ, Dave From Accounts and not least host-buster belle of the ball, Miss Annabel Sings!

The festive feast of anarchic queer cabaret will feature the best bits from Dive’s triumphant year, with performances from the fairest drag kings and queens of the realm, as well as saucy sing-song-a-longs, riotous audience games, delicious festive cocktails and a very special Queen’s speech.

Hosted by the critically acclaimed queen of queer cabaret MISS ANNABEL SINGS, the festive feast of anarchic queer cabaret will feature the best bits from Dive’s triumphant year, with performances from the fairest drag kings and queens of the realm, as well as saucy sing-song-a-longs, riotous audience games, delicious festive cocktails and a very special Queen’s speech.

The event will include a very special guest performance from transgurl cabaret singer SADIE GODIVA, a rising star of Dive’s over 50’s cabaret project which launched for LGBT History Month in February 2017 in partnership with Luminate – Scotland’s creative ageing organization, and LGBT Health & Wellbeing.

“Ho ho ho! That’s right boys and girls and everything in between. Despite troubles longer than Santa’s naughty list and a sack full of greedy giants trying to hack down our beanstalk, we’ve made it to the end of a very sticky pudding of a year!

Join me in the heaving bosom of the Dive family for an extra special festive episode of The Miss Annabel Sings Show as we celebrate the joy of chosen families and look back at the best bits of an exceptionally queer year. We’re especially delighted to be partnering with Waverley Care for World AIDS Day, who like Dive never give up on people and walk alongside anyone affected by HIV or Hepatitis C.’ – Thank you, Annabel, Czech’s in the post, hope you enjoy him.