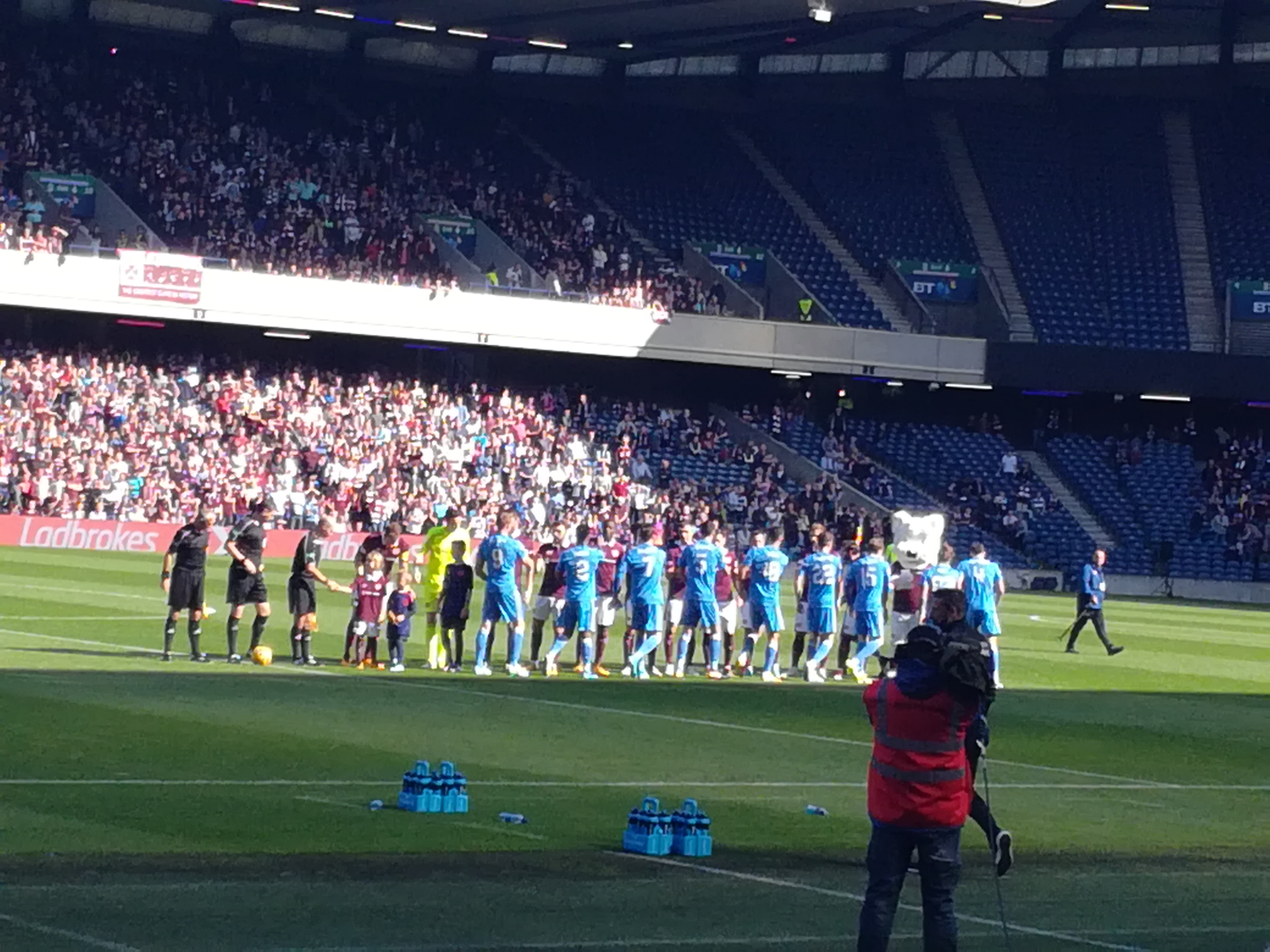 There was a surreal feeling about Hearts first league game of the season on Saturday. The Maroon Army weren’t heading to Gorgie but to the BT Murrayfield Stadium, a Don Cowie corner kick over the Western Approach road away. With Tynecastle’s new main stand not yet ready for use, Hearts have arranged to play their first three ‘home’ games in the Ladbrokes Premiership at the home of Scottish rugby.

The fact we’re in the second week of September and Hearts have been away from home in the first four league fixtures added to the unreal feeling as did the fact that Hearts manager from a decade and a half ago was back in charge of first team matters. Craig Levein looked dapper in his suit, collar and tie, a throw-back to an era when sartorial elegance was still an element of football management.

And then there was the size of the crowd. More than 24,000 were inside the game as the game kicked off slightly late – Hearts biggest home attendance in nearly 13 years.

Levein made four changes from the team that lost 2-1 at Motherwell two weeks ago. Hearts new goalkeeper Jon McLaughlin and fellow new signing Ross Callachan made their debuts while Connor Randall and Isma Goncalves returned to the starting line-up.

Hearts began the game like a rabbit caught in the headlights. There has been much hype about Aberdeen’s admittedly impressive start to the league campaign with the Dons sitting top of the Ladbrokes Premiership with a 100% record after four games. It seemed some of the Hearts players were believing the hype as the Maroons were penned in their own half for much of the opening half hour.

Backed by a large travelling support of around 7,000, the Dons continued to swarm forward but it was Hearts who had a real opportunity when Jamie Walker was felled inside the penalty box – but referee Craig Thomson refused to listen to strong home appeals for a penalty kick.

At the other end, Christie fired in a free-kick which was deflected to Ball but his effort on goal was wide.

As the first half wore on Hearts at last began to appear as an attacking threat. On the half-hour mark, Jamie Walker’s free-kick from just outside the penalty box was well saved by Dons keeper Lewis before he thwarted Isma Goncalves as Hearts finally began to show some belief.

Aberdeen, though, continued to create the better chances and Christie’s low shot went inches wide. Then, the game’s best chance fell to Jamie Walker. The attacking midfielder – the subject of transfer speculation linking him with a move to Rangers before the transfer window closed at the end of August – had time and space just inside the Aberdeen penalty box to chip the ball over keeper Lewis, only for the Dons custodian to produce a stunning leap to push the ball over the bar.

It was then the turn of Hearts keeper McLaughlin to produce heroics as he denied Logan with a fine save with his legs.

It isn’t clear what Craig Levein said to his troops during the interval but Hearts came out looking like a different team in the second half. Ross Callachan got on the end of a pass from Goncalves and the former Raith Rovers player and life-long Jambo thought he had scored on his Hearts debut only for keeper Lewis to produce another stunning save to push his effort wide.

Jamie Walker was next to test the Dons keeper as Hearts began to dominate the game.

In the 63rd minute, Hearts came agonisingly close to making the breakthrough. Fine play from Jamie Walker set up Goncalves who took a step inside before firing a fierce shot off the crossbar. The Hearts players and supporters collectively held their heads in their hands.

As much as the first half had been all Aberdeen the second was a tidal wave of maroon attacks. Kyle Lafferty and new boy Manuel Milinkovic came on and it was the Northern Irishman who had a great chance to score but he dithered allowing Logan to clear.

Both sides then chased the game in the final minutes but it was something of a travesty that the game ended without a goal. It certainly deserved not just one but several. It was the proverbial game of two halves – Aberdeen dominating the first with Hearts very much in control of the second.

Afterwards, Craig Levein said he was disappointed his team did not get the three points their second half dominance deserved. He told the official Hearts website:

“Once I get over the disappointment of not winning the match, I’ll be able to focus on the positives that we can build on. I honestly feel a bit robbed, but enormous credit to Aberdeen and to Joe Lewis today.

“I can’t even blame our strikers for not hitting the target enough, because they did. Sometimes, it’s Aberdeen’s forward players who get all the attention, but at times it felt like the keeper kept us singlehandedly at bay.

“Three points would have really pushed us on, but I’m sure when I look at the match in the cold light of tomorrow, I’ll feel really good about the positives. Right now, though, I’m just disappointed.

“We’ve got a wee bit to go until our next game here, so we won’t have all the nice facilities like we’ve had this week and we need to prepare for that, but everyone in training has worked really well, and taken it onto the pitch, so I can have no complaints.”

It was like a Hearts team of old on Saturday. Yes, there were long balls played on several occasions although when they did get the ball down on the Murrayfield playing surface they passed it with aplomb. However, there was fight, determination and a physical presence which was notably absent during Ian Cathro’s time in charge.

Had Cathro been in charge of Hearts on Saturday I have a feeling the Maroons would have lost the game. Had Billy Davies – one of several out-of-work managers who had expressed an interest in the Hearts Head Coach position – been in charge I have no doubt Hearts would have lost the game. His comments in the press today mark him as a bitter man who has little respect for Scottish football.

But it’s Craig Levein who is back in charge of Hearts. And if the boys in maroon can play like this for the rest of the season they will soon be moving up the league.

Top Man: Aaron Hughes. It’s been a great week for the Northern Irishman and he could almost have lit up a cigar as he strolled through the game