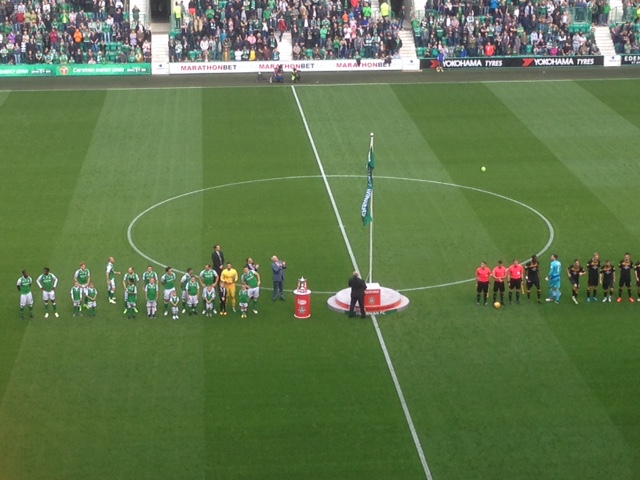 Hibs marked their top flight return with a superb 3-1 victory over Partick Thistle at a packed Easter Road this afternoon, leaving watching Rangers’ manager Pedro Caixinha with food for thought ahead of next week’s game at Ibrox.

Head Coach Neil Lennon made one change to the starting XI that beat Alloa Athletic last Saturday with Paul Hanlon replacing the suspended Darren McGregor in the heart of the defence and taking the captain’s armband from the suspended David Gray.

New signing Anthony Stokes had to be content with a place on the bench.

Chairman Rod Petrie raised the Championship flag ahead of kick off to a standing ovation from a packed stadium.

The new singing section located in the Famous Five Upper helped create a fantastic atmosphere but it was the visitors who took a shock lead in the 6th minute when Chris Erskine latched onto a through ball and fired home from 12 yards.

Hibs fought back quickly and equalised seven minutes later when John McGinn’spass to Simon Murray was deflected into the path of Martin Boyle who beat Tomas Cerny from an acute angle.

From then on Hibs dominated possession although Thistle looked dangerous on the break and looked a class above what Hibs had been used to these past three seasons.

Former Hibs’ defender Callum Booth then made a goal line clearance to deny the home side the lead.

The game was played at a frenetic pace and Hibs had a penalty claim denied when Simon Murray back heeled a pass into the path of Danny Swanson who went down under a challenge from a Partic defender but the referee waved play on.

Hibs took a deserved lead in the 32nd minute when McGinn surged forward before picking out Swanson who forced his way into the penalty box before cutting  the ball back into the path of Steven Whittaker who delicately toe-poked the ball into the corner of the net.

Lennon’s men started the second half brightly and Cerny produced a fine save to deny Swanson and another to deny Simon Murray as Hibs pressed for a third.

That came in the 51st when Boyle played a one-two with Swanson before being drought down inside the area. The referee had no hesitation in pointing to the spot and Simon Murray sent Cerny the wrong way with the resultant penalty.

Both sides had chances and Murray almost grabbed his second from Boyle’s cross but his shot rebounded off the post.

The biggest roar of the day came in the 69th minute when Stokes replaced Swanson and although obviously not 100% match fit, the Irishman did enough to suggest that he will soon be causing problems to SPFL defences.

After the game a delighted Neil Lennon said: “As my old manager (Martin O’Neil) used to say, we were astonishingly brilliant.”

Hibs face Ayr United in the last 16 of the Betfred League Cup on Tuesday night.

Man of the Match Simon Murray.