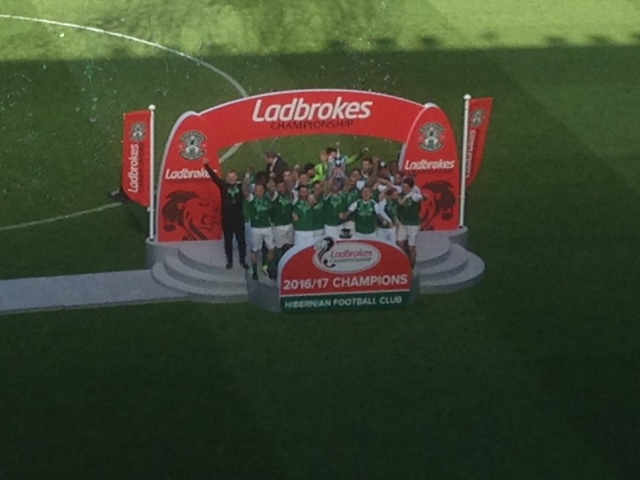 After lifting silverware for the past two seasons, Hibs’ fans are looking forward to the forthcoming campaign with added confidence following a successful summer in the transfer market.

Eight new arrivals including six full internationals has galvanised the supporters who have responded by buying a record number of season tickets.

Many fans now believe that the current squad is the strongest for many years with strength in depth in all areas.

Israeli international Ofir Marciano is arguably the best goalkeeper since Jim Leighton and Ross Laidlaw is an able deputy.

In defence Steven Whittaker is competing with club captain David Gray for the right back slot although the Scotland international can also play in midfield as he demonstrated recently against Arbroath,

Five top class defenders will fight for the two or possible three central defensive positions, Efe Ambrose, Paul Hanlon, Darren McGregor, Liam Fontaine and youngster Ryan Porteous. Most thought that Porteous would be sent out on loan, and that may still happen, but his performances in the pre-season have given Neil Lennon a dilemma.

Lewis Stevenson looks to have the left back position secured, particularly since Callum Crane has moves out on loan but Whittaker can also there.

In midfield, ‘Super’ John McGinn has been in top form as has Dylan McGeouch. Marvin Bartley can provide strength at the back and big things are expected from Lithuanian international Vykintas Slivka.

Martin Boyle and Danny Swanson will provide attacking options but another two youngsters have stepped up from the Development Squad to challenge for a starting spot, Fraser Murray and Scott Martin.

18-year-old Murray in particular has been in sensational form, scoring twice in the Betfred League Cup and Lennon has high hopes for the youngster.

Up front, Scottish Cup Final legend Anthony Stokes has already given himself a target of 20 goals this season whilst Simon Murray has hit the ground running following his move from Dundee United, scoring an incredible seven goals so far including a hat-trick.

Lithuanian international striker Deivydas Matulevicius is an unknown quantity but his strength and height will provide a more direct option for the Head Coach, as will the ever dependable Brian Graham.

A fourth youngster, Oli Shaw may well struggle for a starting position, given the competition, but the teenager who has been prolific in the Development Squad will be hoping to make a few appearances from the bench.

Lennon has warned against over expectation but Stokes believes that the squad is good enough for a top four finish.