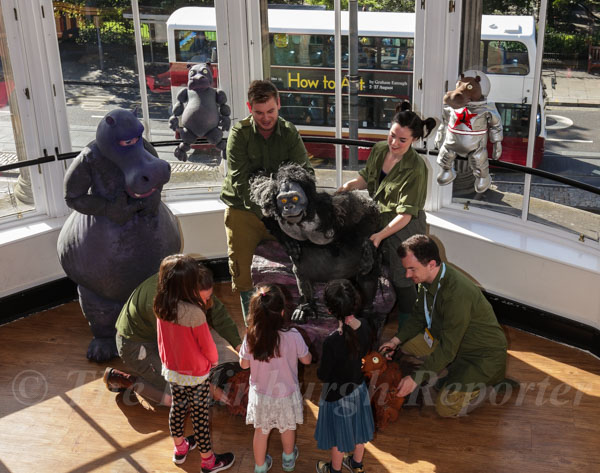 Hippo Sheila, Silver Bob the gorilla and Scratch the porcupine descended on the magical children’s section of Waterstones on Princes Street to present a short extract of their show to few lucky local children.

The First Hippo on the Moon is based on David Walliams’ original children’s book and has been adapted for stage by Les Enfants Terribles and Les Petits’ Artistic Director Oliver Lansley, following last year’s smash Fringe hit Captain Flinn and the Pirate Dinosaurs 2: The Magic Cutlass – the show will make it’s Fringe debut at The Pleasance. It’s a totally fantastic mix of puppetry, music, mayhem and a perfect show for kids aged 3 and up but very much a production the whole family will enjoy. The puppets for the show have been directed and designed by Nick Barnes and Finn Caldwell who have previously collaborated on Dr. Seuss’ The Lorax at The Old Vic and the National Theatre’s productions of Elephantom, War Horse. Tickets are available from here.