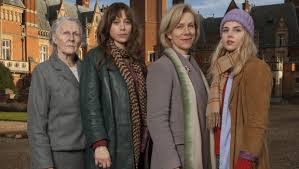 Helga Schneider (Juliet Stevenson) is a 62 year old widow, Austrian-born and living in the UK.  She has a daughter, nurse Beth (Jodhi May), but her closest relationship is with Beth’s daughter, Emily (Lucy Boynton), a student.  When Helga receives a letter to her dressmaker’s shop, she is visibly shaken and shocked.  She tells Emily she must go to Vienna for business reasons but would rather go alone.  At the airport however, Emily reveals that she too is going to meet a great-grandmother she has only just found out about. The strands of the three London-based women’s stories have been woven together but everything begins to unravel as Helga is forced to begin to reveal a deep, dark, shocking secret about her past.

Based on a true story and written and directed by Polly Steele, this film transports and transfixes. The central revelation explains Helga’s coldness as a mother (having been abandoned at 4 years old) Beth’s inability to commit to a relationship (having had a frigid mother) and perhaps Emily’s predilection for older men (in the absence of a male role model).  But the lynchpin of the story and the star of the film, amongst a host of superb performances, is great-grandmother Traudi (Karen Bertling) who moves from unrepentant monster to pathetic, wheedling child and back in the blinking of an eye.  Many of her revelations and actions are chilling but one of the most is the insistence that her abandoned daughter kiss her and call her Mutti.

Let Me Go explores the complex relationships and interdependency of mothers and daughters and the effect that history and our forebears have on who we are.