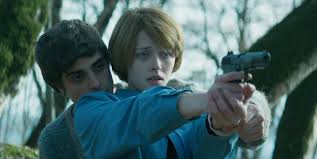 Made in Georgian and Russian with English subtitles, Hostages tells the true story of seven young Georgian people from elite families who decided to hijack a plane to get them to the west in 1983.  The tension builds as the young people exchange a Beatles’ album and money for guns and a fake hand grenade.  When the KGB get wind of their dissent their families and friends are questioned.  In particular their church attendance and friendship with a Russian Orthodox priest are considered suspicious.  As events gather momentum the group treat the plans as a game and their excitement through the wedding of Nika (Irakli Kvirikadze) and Anna (Tinatin Dalakishvili) builds almost into a kind of frenzy.  When they eventually board their flight and it takes off, bad weather soon turns it back to Tblisi.  The group set the hijack in motion but things go badly wrong and the plane’s interior becomes a bloodbath as innocent passengers and crew are mown down.

Georgian director Rezo Gigineishvili meticulously researched the story of the hijack, which took place the year after he was born, and wrote the screenplay with Lasha Bugadze.  The film’s props and costumes given it an air of realism and authenticity.