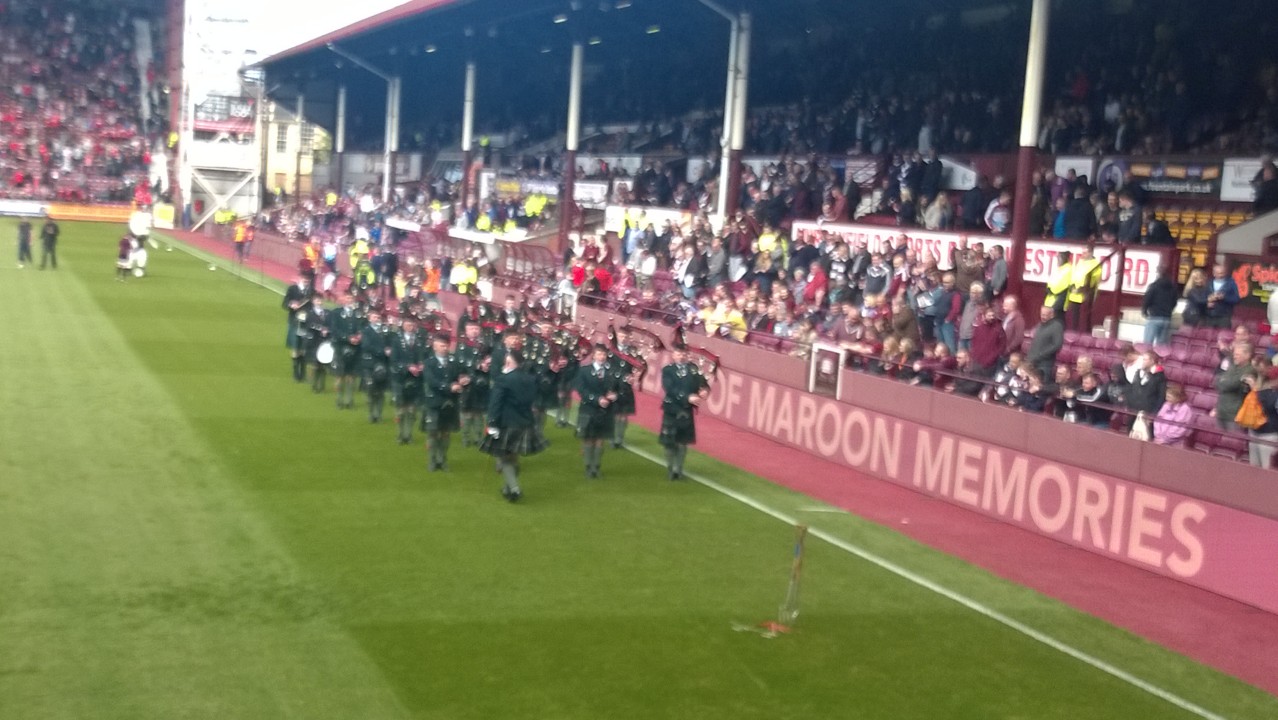 In the last few weeks Hearts have been providing regular updates on the on-going construction of their new stand which will be the final piece in the Tynecastle redevelopment jigsaw. From official club postings on social media to ‘live’ video updates on the steel girders going up in McLeod Street, Hearts supporters – and other interested parties – have been able to keep a watching eye from afar on events in Gorgie.

Hearts have still been playing at Tynecastle, of course – although given some of their recent performances I realise this may be challenged under the Trades Descriptions Act – but Sunday saw the final game to be played before the famous old Archibald Leitch stand is demolished.. For over a century Hearts have both thrilled and driven their fans to despair in front of one of the famous pieces of architecture in Scottish football. But when Hearts and Aberdeen emerged from the old tunnel for the final time on Sunday there was a lump in the throat of many in maroon. I half expected stadium announcer extraordinaire Scott Wilson to play the Rolling Stones classic ‘The Last Time’ as the teams came out – but, tempted though he may have been, he didn’t.

On the field, Hearts still had an objective to aim for – namely a place in the qualifying stages of next season’s Europa League. St Johnstone’s defeat at champions Celtic on Saturday meant a Hearts victory over second-placed Aberdeen would reduce the points gap between them and the Perth Saints to three points. However, Hearts record against The Dons this season is far from impressive and it was no surprise to see the home side’s hopes of European football next season all but disappear with another defeat.

Hearts Head Coach Ian Cathro made two changes to the team that scrambled a 2-2 draw with Partick Thistle eight days ago. Veteran centre half Aaron Hughes returned after missing the last few weeks through injury as did full-back Lennard Sowah. Liam Smith and Choulay were the players dropped to the substitutes’ bench.

A large travelling support from the Granite City added to the atmosphere as the home support looked at the old main stand for the last time. The Hearts players, however, began cautiously and it was the visitors who had the first chance of the game after just three minutes when Considine headed Hayes’ free-kick wide.

As usual, Hearts were passing the ball around without making any serious headway. The Dons almost took the lead after 16 minutes when McGinn sped down the wing before delivering a cross which Hearts keeper Jack Hamilton managed to block. But the Hearts goalie was not to enjoy the best of afternoons.

In the 20th minute Pawlett raced forward for the visitors and fired in a shot from around 25 yards. Hamilton blocked the shot but couldn’t hold on to the ball which bounced from his chest to the feet of Rooney who fired home from six yards to put the Dons in front.

This was summed up by Hearts taking 25 minutes to conjure up their first attempt on goal when Don Cowie crossed from the right towards Jamie Walker but the Hearts attacking midfielder headed wide.

Aberdeen almost doubled their lead on the stroke of half-time when Rooney’s header was pushed away by Hamilton – but the Northern Irishman was deemed offside in any event.

The visitors looked the more likely side to score early in the second half and McGinn was proving to be thorn in the home side. He raced into the box once more and while Jack Hamilton saved his effort on goal the goalie was grateful to see Shinnie’s follow-up on the rebound go wide.

In the 53rd minute Hearts at last threatened. A wee backheel from Goncalves inside the Dons penalty box found Lennard Sowah who crossed for Arnaud Djoum – but the Cameroon internationalist’s effort on goal went over the crossbar.

However, on the hour mark and totally out of the blue, Hearts were level. Fine build up play saw substitute Liam Smith fire in a cross for Isma Goncalves who nodded past keeper Lewis to make it 1-1.  Joy at last for the home support – but not for long.

Just three minutes later, a free-kick from Hayes found the head of substitute O’Connor and his effort on goal found its way past the unfortunate Jack Hamilton to put The Dons back in front.

It was a lead Derek McInnes’ side never looked like relinquishing a second time and the audible frustration from the Hearts support turned to anger when Ian Cathro opted to replace Don Cowie – the home side’s best player – with Bjorn Johnsen. Chants of ‘you don’t know what you’re doing’, previously aimed at referee Willie Collum were now clearly being directed to Hearts Head Coach.

What little chance Hearts had of saving the game disappeared completely with a minute left when Jamie Walker was shown a second yellow card by referee Collum after he tripped Shinnie. An early bath for Walker and an early exit for thousands of Hearts fans.

Those who stayed until the end jeered the Hearts players off at the end of the game. When Scott Wilson announced the players would return to the field to thank the fans for their support this season – something that has become a feature of the last home game of the season these days – he was greeted by howls of derision. Most of the Maroon Army couldn’t wait to get out of Tynecastle quick enough and when Ian Cathro and his players did return to acknowledge the fans there were just a few hundred hardy foot soldiers left.

Afterwards, Cathro said the fans were within their right to voice their displeasure at what has turned into a dismal campaign. He told the official Hearts website:

“This is something where the fans have the right to be angry and disappointed with us. The results and consistency normal to Hearts have not been achieved, they haven’t been there.

“We need to be able to do our work professionally and properly, whether or not there’s positivity and negativity and we accept those things, because we want to be here.”

Next season there will be a new-look Tynecastle. Many Hearts fans are hoping there’s a new-look team and a different approach from some of the players and coaching staff. Because the last five months have been awful.

Hearts owner Ann Budge and Director of Football Craig Levein – unusually quiet during these troubled times – shouldn’t assume Hearts fans will blindly buy season tickets for next season. Some may take a lot of persuading…

Top man: Yet again it was Don Cowie. An explanation from Ian Cathro as to why he took the former Scotland international off wouldn’t go amiss.