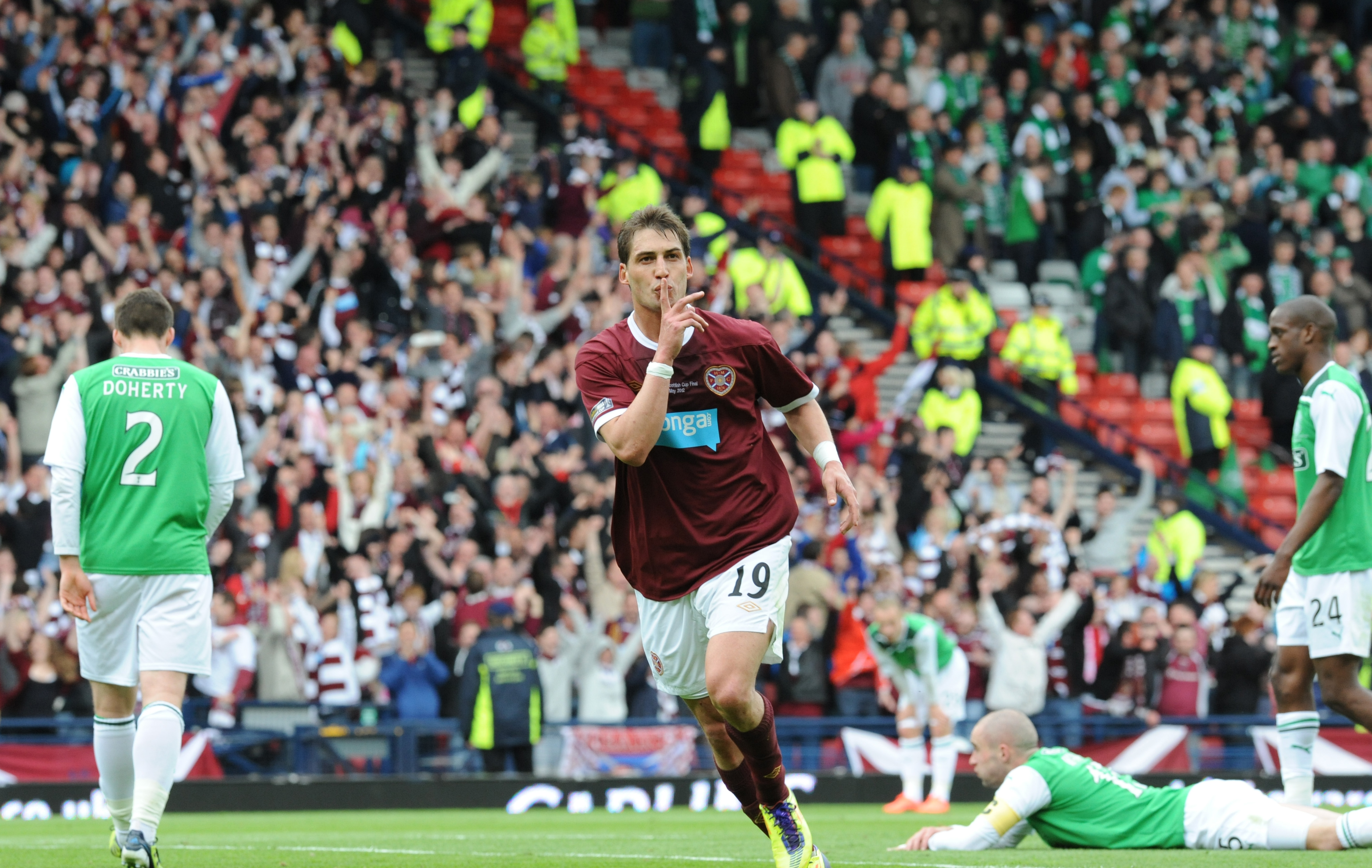 The first time I cried at a football match was 1st January 1973. I was ten years old and was spending New Year with my father, my parents having divorced three years earlier. In 1968 my father had taken me to my first football match, the less than exotic delight that was Brockville Park, Falkirk. Living in Cumbernauld at that time, my Dad didn’t want me being associated with the baggage that came with Celtic and Rangers and his intention was to bring me up as a Falkirk Bairn. But on that cold, October day, Hearts were the visitors. The Maroon Army had taken over the old ground creating an atmosphere that was spellbinding for an innocent six-year-old. The boys in maroon won 3-1 – and that was that. I was bitten by the Jambo bug and it’s been part of my DNA ever since.

On the first day of 1973, I stood on the Tynecastle terracing with my father who was less than thrilled at succumbing to my badgering to take me to the Hearts-Hibs game. I was badgering him again at half-time but for entirely different reasons. Hearts had been the victims of five blatantly offside Hibs goals. I begged my father to take me back to his house in Cumbernauld. His reply was less than sympathetic.

‘Listen, son, you wanted to be a Hearts fan so you’ll bloody well stay to the end’

For decades, those of the Hibernian persuasion had thrown that game in the faces of those in maroon. Damn it, to this day there’s even a shop at the foot of Leith Walk still selling tee-shirts with the Hibs team line up emblazoned on the front. It was an Edinburgh derby that would remain in the spotlight until it was over-shadowed by the Scottish Cup semi-final in 2006 – and then totally eclipsed by the Scottish Cup final in 2012.

There was a tense build up to the 2006 semi-final. With Second Division Gretna waiting in the final the victors knew they would be red-hot favourites to lift the Scottish Cup. It had been eight years since Hearts had last lifted the famous old trophy. It had been 104 since Hibs had done so.

A Paul Hartley hat-trick inspired Hearts to a 4-0 triumph over their city rivals. I wrote at the time it was the mother of all Edinburgh derbies. I was wrong. Hearts duly lifted the cup by defeating Gretna in the final (albeit after a penalty shoot-out) but the chance for Hibernian to gain revenge came six years later when the capital pair faced each other in the Scottish Cup final of 2012.

As was the case before the all Edinburgh semi-final in 2006, the build-up to the first Scottish Cup Final between Hearts and Hibs since 1896 was full of tension. Hearts were installed by the bookmakers as odds on favourites but several players, including Ian Black and talisman Rudi Skacel, were looking unlikely to be continuing their careers at Tynecastle, as there were no offers of any new contracts on the table. Semi-final hero Craig Beattie had been nursing a hamstring injury and wasn’t included in the starting eleven. Hibernian, who had only just managed to avoid relegation, had several players who were on loan, including striker Leigh Griffiths who had scored their winner in the semi-final win over Aberdeen.

A crowd of over 51,000 packed into Hampden and the tension was palpable as the teams walked on to the field. It was Hearts, however, who made the brighter start and good work from Andrew Driver saw a cross for Rudi Skacel but the Czech Republic player could not direct his header on target. If Hearts were nervous they certainly didn’t show it during that opening period as they pinned their city rivals inside their own half. With 15 minutes gone, the breakthrough arrived. A corner from Danny Grainger seemed to bemuse the Hibs defence. Ryan McGowan showed commitment to get to the ball first and his attempt at goal fell at the feet of Darren Barr who stabbed the ball past Hibs goalkeeper Brown and into the net to give Hearts a deserved lead.

Already in the ascendancy, Hearts confidence grew further. Shortly after the goal, Hibs defender Kujabi was booked for a foul on Santana – a foul that would have major implications later. Ian Black was dominant for Hearts and it seemed astonishing that Hibs were allowing the former Inverness Caledonian Thistle player so much space to orchestrate the Hearts midfield. It was from Black’s pass that Rudi Skacel doubled the Maroon’s lead after 27 minutes. Collecting the ball on the edge of the Hibs penalty box, Skacel produced a trademark turn past McPake before firing in a shot that took a deflection off the Hibs player before flying past Brown. 2-0 to Hearts and the Maroon Army erupted in anticipation of another Hearts cup triumph.

Hibs had barely been in the game and when striker O’Connor had a chance on the edge of the Hearts penalty box, his effort on goal soared over the bar and in among the goading Hearts fans in the West Stand. Hearts nearly made it game over when Suso Santana’s effort on goal was scrambled off the line by McPake. And, typical of Hearts, what should have been 3-0 turned into 2-1 as Hibs grabbed an unexpected lifeline a minute before half time when McPake poked home Soare’s cross. At half time, there was slight irritation among the Hearts camp that the game was now on a knife-edge after dominating the game.

The second half had a spectacular start. In the 47th minute, Suso Santana set off on a run down the right wing skipping easily past a couple of Hibs challenges. He had his shirt pulled by the pursuing Kujabi who also clipped the Spaniard’s heels as the winger danced into the penalty box. Penalty said referee Craig Thomson who also booked the Hibs player for a second time meaning the Easter Road team were down to ten men. They also went 3-1 down when Danny Grainger stroked home the resultant penalty kick and looked to the skies in tribute to his late grandfather.

Any lingering doubts that the Scottish Cup was heading back to Gorgie disappeared two minutes later when Hibs keeper Brown could only parry Stephen Elliott’s header and Ryan McGowan leapt to head the ball home. 4-1 to Hearts – and it was game over, a fact the mass exodus of Hibs fans at this point clearly indicated.

Hearts seemed content to toy with their great rivals and sprayed passes all over the Hampden turf, much to the delight of the baying Jambo Army. With 15 minutes to go, Rudi Skacel collected the ball on the edge of the penalty box and fired in an effort and that trundled past Brown to make it an astonishing 5-1 to Hearts. Ecstatic Hearts supporters taunted those few Hibs fans who were still in the National Stadium with chants of ‘ole’ and ‘we want six’ and ‘there’s only one Pat Fenlon’. This was too much for the Hibernian manager who made an ill-judged salute with his arm to the Hearts support – and was duly sent to the stand by referee Craig Thomson for his troubles.

The game ended at Heart of Midlothian 5 Hibernian 1. I had waited 30 years to see Hearts win a trophy before they won the Scottish Cup in 1998; this was Hearts third Scottish Cup triumph in 14 years and was the sweetest of them all. Hearts had dominated the Edinburgh derby for nearly 30 years but this magnificent victory over an admittedly poor Hibernian team took derby domination and humiliation of their city rivals to new levels.

As in 1998 and 2006, the west end of Edinburgh partied. As the Maroon Army bellowed throughout this glorious weekend, the Hearts were having a party – the Hibs were in their beds!