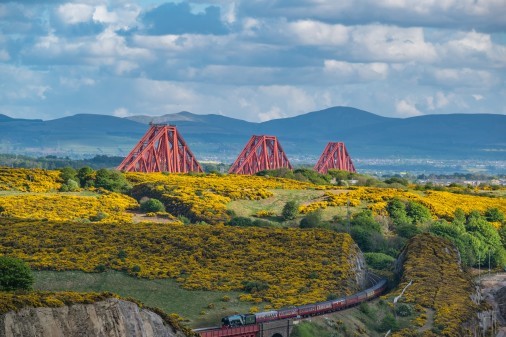 A chance to step back in time and travel by steam train on Scotland’s newest scenic rail route as well as cross the iconic Forth Rail Bridge is back on the timetable this summer.

Passengers will have the opportunity to travel on a train hauled by a Black Five steam locomotive when it travels for the first time on the route that takes in two of Scotland’s Great Scenic Rail Routes.

The steam experience is being operated by the Scottish Railway Preservation Society, a charity which owns and maintains the former British Rail coaches. It is the first time that passengers can board a steam train in West Lothian and Fife to cross the Forth Rail Bridge and travel over the new Borders Railway

The journey begins in Linlithgow before travelling over the Forth Rail Bridge and round the Fife coast before heading south on the Borders Railway to Tweedbank every Sunday in August.

VisitScotland says that the return of steam experiences will help shine a spotlight once again on the Borders Railway as it approaches two years since it was officially opened by HM Queen in September 2015 and highlight the quality of the country’s tourism offering.

Passengers from Linlithgow will be able to enjoy the unforgettable experience of crossing by steam the Forth Rail Bridge – designated a UNESCO World Heritage Site in 2015 – before taking in the spectacular views from Kinghorn, Burntisland and Aberdour along the Fife coast.

After crossing the bridge once again, the train steams through Princes Street Gardens before arriving at Edinburgh Waverley and continuing along the 31-mile route of the Borders Railway, stopping at Galashiels and Tweedbank.

Passengers will be able to enjoy more than two hours in the Borders before the return journey and are being encouraged to visit some of the nearby towns and visitor attractions on offer in the region.

Trips are being arranged to Abbotsford House, the home of Sir Walter Scott, as well as to the historic towns of Melrose and Galashiels. The Scottish Borders is celebrated for its outstanding natural larder with a variety of food and drink establishments on offer in the local towns, as well as at Seasons restaurant over the River Tweed in Gattonside. The hop-on, hop-off City Sightseeing Scottish Borders open top bus will also be operating tours of the Borders for train passengers.

The Forth Bridge and Borders Steam Special Experience will depart from Linlithgow every Sunday in August, picking up passengers at Dunfermline, Kirkcaldy, Dalgety Bay and Edinburgh Waverley.

The return will be diesel-hauled from Tweedbank to Newcraighall, where the train will be turned on Niddrie triangle so that it can be steam-hauled for the remainder of the return journey.

The Black Five locomotive was designed by Sir William Stanier for the London, Midland & Scottish railway and a total of 842 were built between 1934 and 1951.

The trains will be operated by West Coast Railways.

For more information on the rail experiences and add-on ticketing offers to Abbotsford House, Melrose and Seasons in Gattonside, please visit: http://www.srps.org.uk/borders