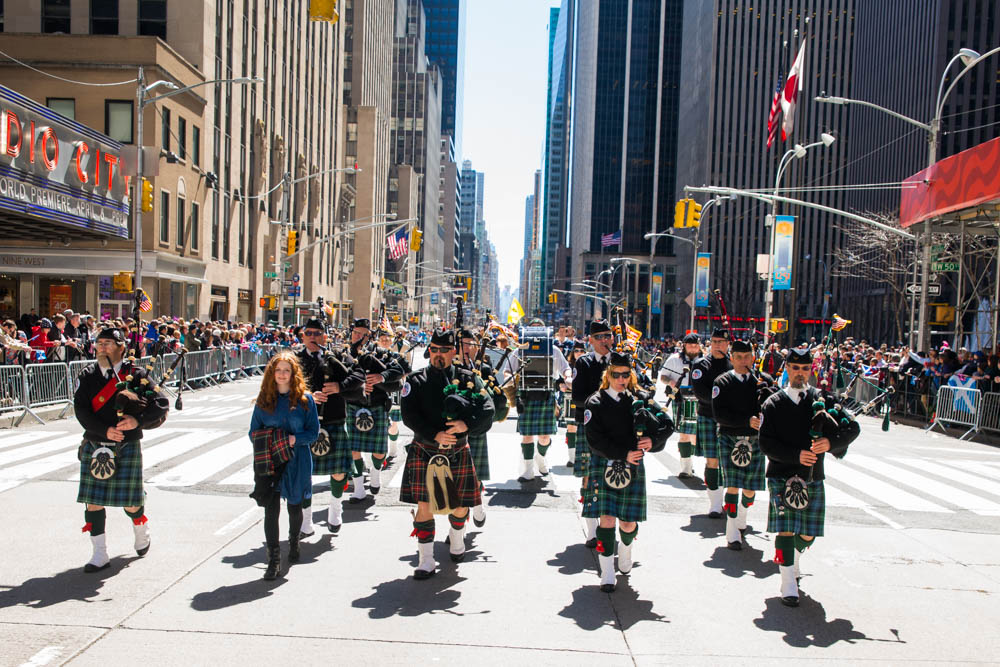 Edinburgh was well represented in New York at The 19th Tartan Week parade down Sixth Avenue on Saturday. The day dawned beautifully sunny with clear blue skies, all adding to the sense of anticipation from the minute we arrived at Bryant Park for the reading of the Declaration of Arbroath. Near the front of the parade TV personality Phil MacHugh had managed to find a seat in the back of the official Barbour Range Rover waving to the crowds along the route.

Barbour was the Platinum presenting sponsor of the parade and the Barbour Scottie and West dog pack.

At the back of the line Howie Nicolsby of 21st Century Kilts was accompanied by wife Charlie and his two small sons. Howie was the Grand Marshal a few years back and is well known in the city where he has been fitting kilts in the St Andrews Bar for the last week and more.

He had dressed this year’s Grand Marshal Tommy Flanagan who had flown in from LA to head up the procession. Although a little too busy to talk to The Edinburgh Reporter Flanagan who got his big break in Braveheart, did manage to sneak a look at our latest newspaper outside the Algonquin Hotel where those taking part mustered! In the parade there was political representation by the SNP with Joanna Cherry QC MP, Tasmina Sheikh MP, Corrie Wilson MP and Paul Monaghan MP all marching together.

Edinburgh Napier University led by Leigh Dilks was one of a number of Scottish universities represented. Beforehand in Bryant Park, Presiding Officer of the Scottish Parliament Ken Macintosh hit the nail on the head  when he said he thought he was in Scotland with all the pipe bands he could hear, but then realised the weather was too good! It was a perfect day for the march with blue skies and lots of spectators lining the route.

The NYPD turned out in force complete with smiles and good humour to keep everyone safe. But the route is so wide that there was plenty of room for the highland dancers, the pipe bands and of course the Kilted Yogis to perform.

In 1998 the U.S. Senate declared 6 April as National Tartan Day when they would recognise the contribution made by those of Scottish descent to the USA. In 1999, two pipe bands and a small group of Scottish Americans marched from the British Consulate to the UN—the first Parade!

The event is organised by the Committee formed from three groups of volunteers , the St. Andrew’s Society of the State of New York, the New York Caledonian Club, and the American-Scottish Foundation. This was a precisely organised procession, beginning at 42nd and Sixth Avenue and ending at 55th where VIPs on top of the Barbour Bus were ready to cheer those taking part. With stops along the way to allow the highland dancers and others to perform for the crowds, it took about an hour and a half to pass by.

Our photos are all on Facebook here but here are a selection!