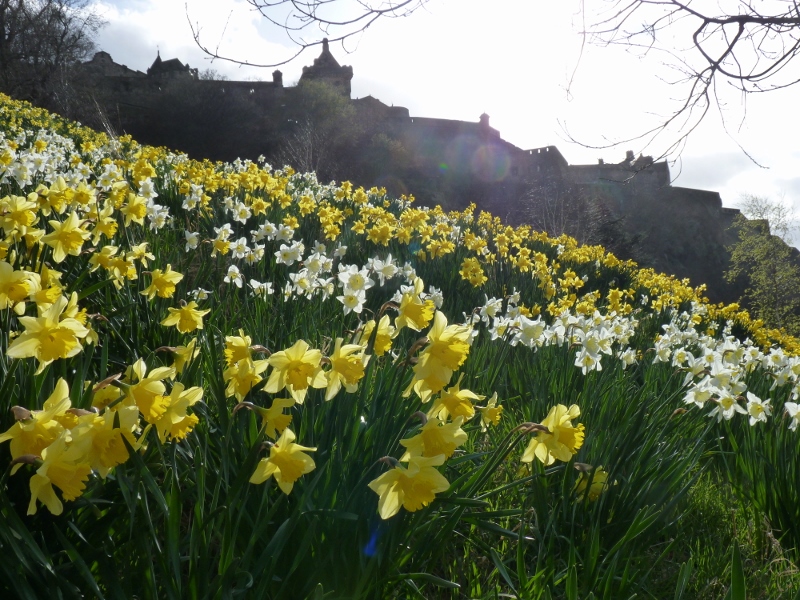 If you don’t mind the cool air, this Easter weekend looks like being a cracker. The daffodils are still in their full glory, the whin is turning bright yellow and the birds are singing like naughty choirboys from every hedge.

Just about every visitor attraction is staging special events, from an Easter bonnet competition at Castle of Mey in Caithness to the traditional Easter egg hunt at Traquair House in the Borders.  On Loch Tay, there’s a pancake fry-up at the Crannog, a Neil Gow fiddle festival in Dunkeld and horse racing at Musselburgh where Judy Murray will present the new £100,000 prize, the Queen’s Cup.

Glasgow and Edinburgh Airports are expecting huge numbers of fliers this weekend with the normal tourist traffic coinciding with the return of the school holiday migrants.

You might think this would put us all in a prosperous mood.  And, sure enough, the unemployment figures have taken a surprising turn for the better, dropping to 4.5 per cent of the workforce.

But here’s a thing, there are 27,000 people who have left the jobs market altogether and our economic growth rate in the last quarter was minus 0.2 per cent.  Real wages are falling and, according to the latest survey, 40 per cent of our small businesses are pessimistic about the immediate future.  Add to that the continuing “austerity”  from the UK Treasury and our springtide champagne begins to lose its sparkle.

However, one public spending project which has come good this week is the “missing link” on the M8 motorway between Glasgow and Edinburgh.  Seven miles of the motorway were left as duel-carriageway when the M8 was built in the 1960s but by the beginning of May, the frustrating bottleneck of road works will be over and journey times between our two main cities will be cut by 20 minutes.

Another infrastructure project which has enjoyed some good news this week is the Borders Railway.  The transport minister Humza Yousaf announced a study into extending the railway from Tweedbank near Melrose to Carlisle.  The re-constructed line opened just a year ago and has attracted 1.2m passenger journeys, that’s well ahead of expectations.

I was one of those passengers this week and it allowed me to enjoy a cycle run from Melrose to Dryburgh Abbey. The River Tweed sparkled in the sun.  The park-and-ride car parks were full, the tea rooms were reporting good business and new houses seemed to be going up everywhere. That’s what a railway line does for the economy.

I’m not saying the motor car age is over but one of its great champions died this week, Sir Arnold Clark.   Back in the 1950s he used his RAF de-mob money to buy an old banger, did it up and sold it.  And from that humble beginning in Glasgow he founded the Arnold Clark car dealership with garages throughout the UK.

Last year he became Britain’s first billionaire car salesman.  He had an interesting collection of vintage cars and at one point owned the racing yacht “Drum”.  In 1988, “Drum” with Arnold Clark at the helm won the famous Tobermory race before being hit by a Royal Navy submarine.

Tobermory was in the news this week when parents at the local school took it into their own hands to find a new head teacher. The post has been vacant for nearly a year. Official adverts for the job have twice failed to find a suitable candidate.

The parents have been using the internet to post photos of the colourful houses around the harbour, famous for being the setting for the children’s TV programme Balamory. And they’ve been getting a huge response.  Let’s hope there are some serious candidates among them.

One woman who has taken her vocation seriously is the Scottish nurse Pauline Cafferkey.  She is now planning to return to Sierra Leone to meet some of the children left orphaned by the Ebola outbreak in 2014.

Pauline went out to West Africa as a volunteer to help in an Ebola clinic run by Save the Children but when she arrived home she fell seriously ill with the virus herself and spent weeks in hospital, at times close to death.  Now she is hoping to take part in a 10k run in Sierra Leone to raise funds for children affected by the outbreak which killed an estimated 11,000 people across West Africa.

“I’ve had a terrible few years,” she told a BBC interviewer, “so it will be good to go back just for things to come full circle for me and to find a little bit of closure.”   Such bravery, followed by resilience, deserves our deepest respect.