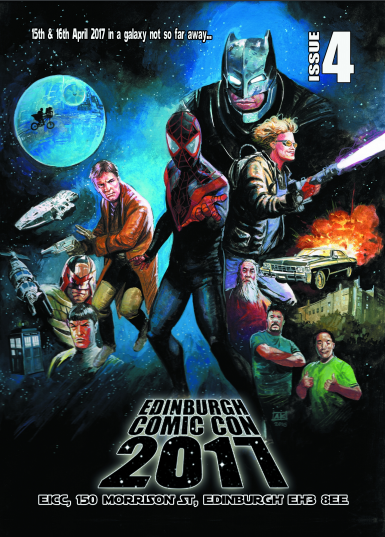 Edinburgh Comic Con is back and bigger than ever.

On Saturday and Sunday the Edinburgh Comic Con returns with a programme spread over both days. This year’s show will include the Premier of Shooting Clerks the film about the making of the 90s independent movie from local filmmakers as well as U.S. TV Stars from the hit show Comic Book Men.

Along with the chance to pick up some rare comics and collectables, this event should see fans pack the Edinburgh International Conference Centre to battle it out for the highly contested best Cosplay award.

Other guests booked for this year’s show include Scottish-born comic book artist Garry Brown (Marvel’s Iron Patriot, DC’s Catwoman among his own projects) and Emma Beely (DC’s Wonder Woman and Robbie Burns: Witch Hunter) are among the many names from the comic book world in attendance.

The event runs starts at 10 am on Saturday and again at 10 am on Sunday. Tickets will be available on the door for more information check out www.heroconventions.com