So, farewell then, Robbie Neilson. A Head Coach whose appointment in 2014 invoked some bemusement amongst some Hearts supporters who were upset at seeing a club icon, Gary Locke, being show the Tynecastle door by Hearts new owner Ann Budge and newly appointed Director of Football Craig Levein. The critics weren’t slow to offer their opinions. Neilson lacked experience, some said. He was too young said others. He would be nothing but Levein’s puppet said the more cynical observers. Yet, on the opening day of season 2014/15, Neilson did what many other Hearts managers before him – including Levein – had struggled to do. He took his team to Ibrox and defeated Rangers.

Rangers were Neilson’s first opponents as Hearts Head Coach. They were also his last. As a barometer of Hearts progress, it’s worth recalling that the Maroons romped to the Championship title in some style – going unbeaten in the league until February – leaving Rangers, with a far larger wages bill, trailing in their wake.

This was meant to be the most competitive season in second tier history. Yet, rookie Robbie led his Hearts team to the title by some distance, leaving not only Rangers but Hibernian way behind. Everything in the Tynecastle garden suddenly looked rosy again after the grey landscape that was the trauma of administration – and subsequent relegation from the Premiership – in 2013/14.

Upon their return to the top flight of Scottish football, Hearts made an impressive start and won their five opening league games. For a while, they even topped the Ladbrokes Premiership although the financial might of Celtic would soon put paid to such lofty ambitions. Hearts, though, were chasing runners-up spot and jousting with Aberdeen. Neilson was doing a fine job, having recruited wisely to cope with the increased demands of the Premiership. Then came the early months of 2016 and the Scottish Cup, a competition in which Hearts have tasted succulent glory in recent years, in particular, the 2012 Scottish Cup final hammering of Hibs.

Hearts got off to a great start, knocking out Aberdeen on a memorable Saturday evening in January, Callum Paterson’s early goal being sufficient to send the Dons packing. In the next round, Hearts were given a home draw against lower league opposition – Hibernian. The Hibees would make it difficult but surely Robbie Neilson’s side would have enough to see them off, particularly as the tie was at Tynecastle? When Hearts established a 2-0 lead by half-time this certainly seemed to be the case. But the second half brought new doubts to the Hearts support. Hibs dominated and even with Hearts still holding a two goal advantage with little over ten minutes left, finger nails were being chewed among the home support. Then, well before the demolition work to rebuild Hearts main stand, the roof fell in. Hibs scored two late goals and a tie which had been won had to be fought for again – this time at the home of their bitter rivals.

Hearts lost the replay 1-0 and jubilant Hibs fans revelled in maroon misery. The Hibees compounded this misery by going on to end their 114 year wait for the trophy – a source of endless mickey-taking from Hearts fans – and leaving those in Gorgie to ask ‘how did that happen?’.
The departure of striker Osman Sow on the eve of the first Hibs cup tie didn’t help but Hearts could hardly turn down an offer of more than £1m for a player who would be out of contract at the end of the season. Hearts drafted in another striker Abiola Dauda but it was clear he was no Osman Sow. Deflated from their cup exit; Hearts fell out of the chase for second place in the Ladbrokes Premiership. Qualification was secured for the following season’s Europa League qualifiers but the feeling of disappointment hung around Tynecastle like a bad smell.

In the aftermath of the bitterly disappointing cup exit to Hibs, some supporters hired a small aircraft to fly over Tynecastle trailing behind it a banner which read ‘No Style, No Bottle, Neilson Out’. Most fans showed their derision at such a stunt but there were some dissenting voices and some fans began to question Neilson’s tactics and team selections.

Some fans questioned why some players were allowed to leave Tynecastle. Goalkeeper Neil Alexander, for example, was on the verge of extending his time in Gorgie by signing a new contract which would see him take on coaching responsibilities. The former Scotland keeper had been a rock of stability for a young Hearts defence. Then, without warning, he was gone, released from Tynecastle. He signed for Aberdeen and many questioned Hearts decision to let him go. Other departures such as Billy King and Gavin Reilly – albeit both are on season-long loans to Inverness Caledonian Thistle and Dunfermline Athletic respectively – were also questioned. On his day, King is one of the liveliest wingers in Scottish football – yet, he was replaced by Tony Watt, a former Celtic player who had struggled to get a game for Charlton Athletic. The departure of promising young defender Jordan McGhee – another season-long loan, this time to Middlesbrough’s reserve team – was another perplexing decision.

Those dissenting voices became louder during the summer when Hearts exited the Europa League in July after an embarrassing defeat at the hands of Maltese side Birkirkara – thus, Hearts became the only Scottish club to lose a competitive tie against Maltese opposition.

Some Hearts fans also questioned some of the club’s summer signings – striker Conor Sammon being the principle target of their ire as the big Irishman struggled to impress. Neilson strove to get it right but his inconsistent team selection, allied with team tactics which appeared to focus on countering the opposition rather than playing to Hearts strengths, irritated many. A succession of drawn games against teams many fans expected Hearts to beat added to the frustration. The exclusion of the gifted Arnaud Djoum, for example, had many fans scratching their heads.

Hearts last two games appear to sum up why there is so much frustration among the supporters. Hearts went without a win in four games with two successive 3-3 draws on the road, at Inverness and Hamilton. Hearts took an early lead in Lanarkshire and looked good value to record three points. But defensive frailties were their undoing once more and they found themselves 3-1 down. Hearts scored two late goals to salvage a 3-3 draw but the feeling persisted they should never have been in that position in the first place. But then a vastly improved showing against Motherwell at Tynecastle – with Djoum reinstated and the lively Robbie Muirhead given his chance from the start – saw Hearts cruise to a 3-0 win.

It wasn’t without good reason that many fans thought on Saturday night that Neilson would do his usual tinkering with team selection and tactics for the visit of Rangers on Wednesday. But, unusually for Robbie, he didn’t. He went with the same starting eleven and employed much the same tactics that defeated Motherwell. It was only the second times in two years that Neilson had opted to go with an unchanged line up. And the result was a pulsating victory over Rangers which lifted Hearts into second place in the Ladbrokes Premiership.

And there is the rub. Neilson has done a decent job in resurrecting Hearts from the ashes of relegation and administration to a team in the upper echelons of top flight football. But the feeling remains Hearts could have done even better. The team’s record in cup competitions is distinctly average. Hearts record against Celtic is poor although you could say that about most other teams in Scotland right now. The European ‘campaign’ could scarcely be described as such – home before the postcards. And a plethora of drawn games have hardly provided inspiration.

Robbie Neilson will always have a place in my heart (if you’ll pardon the pun) His goal in Basel in the Uefa Cup in 2004 and that goal-saving tackle against Gretna in the 2006 Scottish Cup final contributed to two of the happier moments of my life. For that, I shall always be grateful to the man for who sartorial elegance seems second nature. And I wish him and his assistant Stevie Crawford who is going with him, every success at Milton Keynes (although it says much about Scottish football that Neilson and former Hibernian manager Alan Stubbs find MK Dons and Rotherham United a more attractive proposition that managing two of Scotland’s leading clubs)

But it’s time to open a new chapter in the story of Heart of Midlothian FC. The roller-coaster ride is on the move again – but I feel Hearts will once again be moving in the right direction. 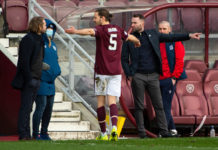