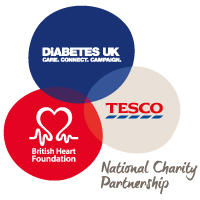 Next weekend Tesco stores across Scotland are holding a mini-festival. They will be raising funds for National Charity Partnership by which the supermarket supports Diabetes UK and the British Heart Foundation.

The Rock the Shop fundraiser will include flash mobs, lip sync battles and fancy dress competitions.

Customers will be asked to support the cause by contributing to the cause. Tesco staff want to raise £30 million by 2018 and they are almost halfway there already!

Stores in Scotland have contributed just over £1million to the total thanks to customers’ generosity.

Lindsey Crompton, Head of Community at Tesco, explained:  “Rock the Shop is a great way for Tesco colleagues to get involved in celebrating the music they love whilst also raising crucial funds for the National Charity Partnership. Together, Diabetes UK, the BHF and Tesco are able to address and make a real impact in improving the health of the nation, which is vitally important to all three partners.

“I’d encourage customers who are in stores over the weekend to get involved and support colleagues in their fundraising, as they showcase their musical sides! It should be a really celebratory atmosphere in the store – I hope customers will embrace the fundraising fun.”

For more information about the National Charity Partnership’s Let’s Do This campaign, visit lets-dothis.org.uk