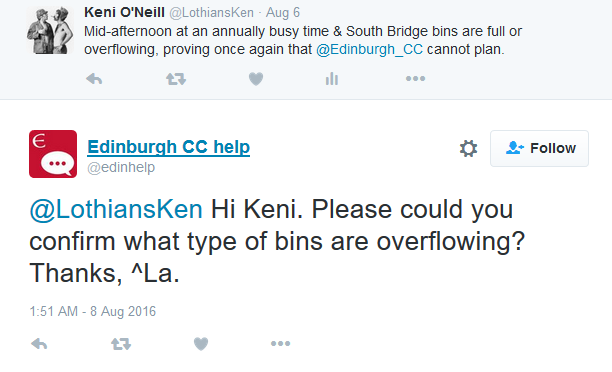 You may have noticed of late that myself and other people have bemoaning the state of Edinburgh’s bins and rubbish collection.

In fact, I admit I have gone a little Kevin Turvey – Investigative Reporter* on the subject.  Over the last two months, the City of Edinburgh Council (CEC) has spectacularly failed to deal with collecting and emptying bins, deal with litter in general and fly-tipping incidents.

Streets have become liberally scattered with household waste.  The
seagulls, at least in my neighbourhood, having had a field day ripping open bags of rubbish and helping to spread their contents while looking for food.  The problem has got so bad that even the Evening News is reporting it on a daily basis, although a poll of their readers reckons the problem is no worse than it was during the Festivals.

I disagree, I think it’s actually got worse since the International Festival came to an end with the fireworks last Monday.

According to the Evening News this morning**, “City bosses have today vowed to act on any photos of overflowing bins
and mess highlighted as part of the Evening News’ Bin Watch campaign.”

To make matters worse, at least in terms of city pride, the Evening Times has reported Glasgow City Council’s new environmental task force has cleared almost 700 tons of rubbish since June.  According to the article, “In the north-east (of Glasgow), 96% of all jobs were completed within 12 hours.”  If only the picture was as rosy on the east coast, in our so-called Edenburgh.

Since the start of August, I have started reporting over-full bins, litter and fly-tipping through CEC’s website.  To say that I am underwhelmed at the results is an understatement.  This week I’ve even created a spreadsheet to track the incidents I’m reporting and how quickly they are cleared.  Trust me, I know how sad that sounds, feels even more so, but all the Council give you is a reference number.  The forms ask you if you would you like status updates about the problem but I’ve yet to hear anything back from them.

That, sadly, does not surprise me given at the start of August it took the Edinburgh CC Help Twitter account almost 48 hours to respond to this tweet about the state of the litter bins on the Bridges.

Given the Council claims it is their Customer Service account and “We’re here 24/7,” that’s not even pitiful.

Now, I’m not just a moaning minnie and have taken action to help improve things.  About three months ago I decided to start picking up and binning at least three pieces of litter from the street a day.  I don’t count any more, but I reckon I’m now binning at least a dozen pieces of other people’s rubbish.  Admittedly, not all of it is down to people dropping litter on the street.  I’d guess that a good bit of it is debris left over from when the scaffies have emptied bins, at least if my street is anything to go by.

This week, I’ve also signed up to the Leithers Don’t Litter’s neighbourhood pledge and promised to do my bit to keep my street litter-free.  I even got a free litter picker and a pair of gloves from the Council to do the job they are spectacularly failing to do.  The group hope that the more people who adopt their streets, then the cleaner Leith gets and when people see their neighbours picking up litter it could hopefully change their attitude about littering.  We can hope.

Either way, there are huge problems with rubbish collection all over the City.  We, although I definitely see a great deal less of it when I walk through Marchmont, Morningside and Sciennes.  As I said, the Evening News has featured a series of articles this week blaming the street cleansing people and subtly calling for privatisation of the service.  Edinburgh already has a privatised recycling service and that is working even less well than that the general refuse one.  I’ve heard that there were a series of budget cuts in waste management, with senior, well-respected cleansing team leaders laid off.  Needless to say, that has had a knock-on effect among the bin men and their moral – if their bosses aren’t safe, their jobs are unlikely to be.

A few years ago, following cuts from the devolved and central government, CEC thought a good way to save money was to start charging for their free annual uplift of large items.  You know what happened next, folk just dumped old furniture and kitchen units in the street.  Not only did it create a problem but it stopped a recycling opportunity. A couple of years ago I had to bin a broken television.  Before, I could have ordered an uplift and it would have gone to the Seafield community recycling centre.  Not with the charge in place, which is now a £26 minimum; instead it went into the general waste, although perhaps that waste is sorted into what it is possible to recycle.  I doubt it somehow.

Over the weekend, I was away with family, busy telling everybody what abeautiful city I live in and how I couldn’t imagine living anywhereelse.  That changed on a fifteen minute walk home from Picardy Place where I saw eight cases of over-filled bins.  To add salt to the wound, the end of my own street was the worst, with at least a dozen bags sitting at the base of an over-flowing bin.

Needless to say, I reported them.  I’ve also tweeted to the Council’s City Centre & Leith Team account about the rubbish in my street five times so far this week.  Perhaps something will happen today given I’ve included Lesley Hinds, Labour Councillor for Inverleith and Convenor of the CEC’s Transport and Environment Committee.  In other words, the person who is in charge
of this rubbish.

A laddie can hope.  Then again, the Council website
claims the most recent delay to rubbish and recycling collections happened on Tuesday 16th August.

In fairness, some action has taken place as today the scaffies took away all the loose bags around the base of the bin, although sadly did nothing about the loose rubbish.  The thing that sticks in my craw though is on Tuesday morning on my way to work I passed a street-sweeper next to the bin on the phone, presumably to his bosses to tell them about the situation.

I’m sure you’re thinking that it is all well and good moaning about the state of the bins but what would I do to improve things.  Quite a lot actually, here just a few things that I’ve thought of.

I’m sure there are other ways that would improve a rubbish service but I reckon these are a good start.  You can find how to report rubbish via your local authority’s website. For CEC, there are separate web-pages for reporting litter and over-filled bins for instance.

I’ll leave you with a little ditty I wrote this evening inspired by Solomon Grundy, a 19th Century nursery rhyme.  Thanks to my good friend Heidi for helping with the last line.

Pestilence riding in on Friday.

*Younger readers should ask their question but he dates back to when Rik Mayall was still funny and didn’t think a Nazi salute was the height of satire.

**No, I’ve yet to fathom why they keep that title when they publish it in the morning.

The bin at the end of my road was emptied yesterday, 9th
September, four days after I reported it and after eight tweets to the City Centre & Leith Team account.  Unsurprisingly, including Lesley Hinds in a tweet everybody could see had the desired effect.  Name and shame seems the only strategy to stir the Council into action now, sadly. If that is what it takes, so be it.

In fairness, I did praise the City Centre & Leith Team for finally
acting; the Mammy’s always said better late than never and I’ll take the positives where I can find them.  Plus, they did lift the rubbish that was again building up at the foot of the bin by yesterday morning.  That surprised me given they’d failed to deal with it in a co-ordinated manner earlier in the week.  However, I did follow it up by reminding them of the four references of other incidents I had logged that were still outstanding. That was before I reported three more cases of fly-tipping and one of a litter-strewn local street.  I honestly believe
that reporting these incidents are worthwhile, if only to hold CEC and my councillors, three of whom sit on the Transport and Environment Committee, to account.

Aye, it is a little obsessive but I don’t think taking pride in how your neighbourhood looks is necessarily a bad thing.  We pay for this basic service, if the Council won’t do it properly we have to tell them and complain. Here’s hoping they will start listening more to my rubbish complaints.  You’d hope they would given we elect a new batch of councillors on Thursday 4th of May 2017.  Fingers crossed that they will make a difference to how CEC operates.