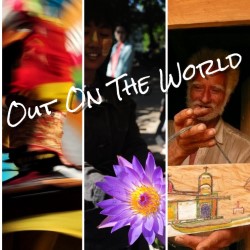 ‘If you went down the muddy track to the loo in the night, you always met the Bad Cow…’ Not many of us have to go down muddy tracks to go to the loo in Edinburgh – still fewer of us are likely to meet a cow, bad or otherwise. For human rights worker Catriona Knapman, however, such experiences were part of her daily (nightly?) life in Nicaragua, one of the three countries she takes us to in Out on the World, her one-woman show at Opium.

Catriona tells her story through a mixture of narrative, poetry, music and pictures. In Nicaragua, ‘land of coffee, tobacco and revolution’, she shows us a photo of the ageing school bus on which she travelled to meet remote rural farmers (other modes of transport were motorbikes and horseback – the latter perhaps the safest in a country whose roads leave quite a bit to be desired). The people she met introduced her not only to their families and communities, but also to their prize possession – their cow. A ‘good’ cow gives milk and behaves. A bad cow meets unsuspecting aid workers on muddy paths…

Out on the World is a simple show and a powerful one; Catriona delivers her poems beautifully, in clear and animated tones.

They tell of oppressed women and unfair trade practices – and also of a fat local man teaching dancing in an old fire station;

‘The only man in Nicaragua to wear Lycra’

and Fran, a former revolutionary commandante who gives her this advice on her love life; ‘You must have a woman in every town you visit’. From Nicaragua we move on to Egypt, ‘known for pyramids, camels and freedom…’ After the 2011 revolution Egyptians believed they could change the world; Cairo was buzzing with creative energy. One of Catriona’s poem about her stay in ‘the land of the rusty cockerel and the husky Imam’ looks at the ways in which the language of faith is part of everyday Egyptian life. She also, discusses gender politics in a country where 30% of women are illiterate, and wonders about all the female writers and poets there might have been;

‘Poems are whispered in the pouring of breakfast tea.’ Catriona currently lives and works in Myanmar (Burma), a country gradually opening up its borders after years of political isolation; the ‘land of the stranger’s smile’. She shows us a picture of a smiling woman in a market; Burmese people have seen so few Westerners that they always smile when one appears. Whilst Myanmar is developing rapidly, and Yangon (Rangoon) now has many shopping malls, cafés and fast food outlets, there are still only five ambulances for a population of around 5 million people. In her poems about Yangon Catriona draws parallels between the new bridges and flyovers built to ease traffic problems and the new emphasis on profit and loss, the ‘vertical axes’. Mayanmar held its first elections for 25 years in

2015; Catriona’s poem about what was for many of her friends their first ever opportunity to vote, speaks of the hopes raised by these first steps to democracy. Another poem describes the dilapidated colonial buildings of the old city and the stories they hold. (Image of Yangon: Getty Images (c) Craig McCourry).

Out on the World is unusual, entertaining and engaging – and for me at least it is a great example of what the Fringe should be about; ordinary – and extraordinary – people getting the chance to tell their stories.

Catriona lets us see a different side to countries we may think we know from the news; her stories of the people she has met on her travels are fascinating and her poetry is both powerful and charming. It would have been interesting to hear a little more about Catriona’s own journey – how she became involved in aid work and what she feels about it – but perhaps this could form the basis for another performance.

Until then we are left with vivid images of rural coffee farmers, fat men dancing in Lycra, and bad cows following unsuspecting aid workers down muddy tracks. Catriona Knapman is a Scottish writer and human rights worker. Originally from Glasgow she has lived in eight countries in four continents over the past ten years and currently works on land and women’s rights in Burma/Myanmar where she has been based since 2012. Her writing has been published in Magma, Guernica, Poetry Scotland, Kweli, Tiferet and The Myanmar Times, among others. She has performed at Open Mic and poetry/music events in Yangon and around the world.

The show forms part of PBH’s Free Fringe, so there is no admission charge – but please remember that Catriona has had to pay her fare from Myanmar to Edinburgh, so if you enjoy the show, do contribute whatever you are able at the end.