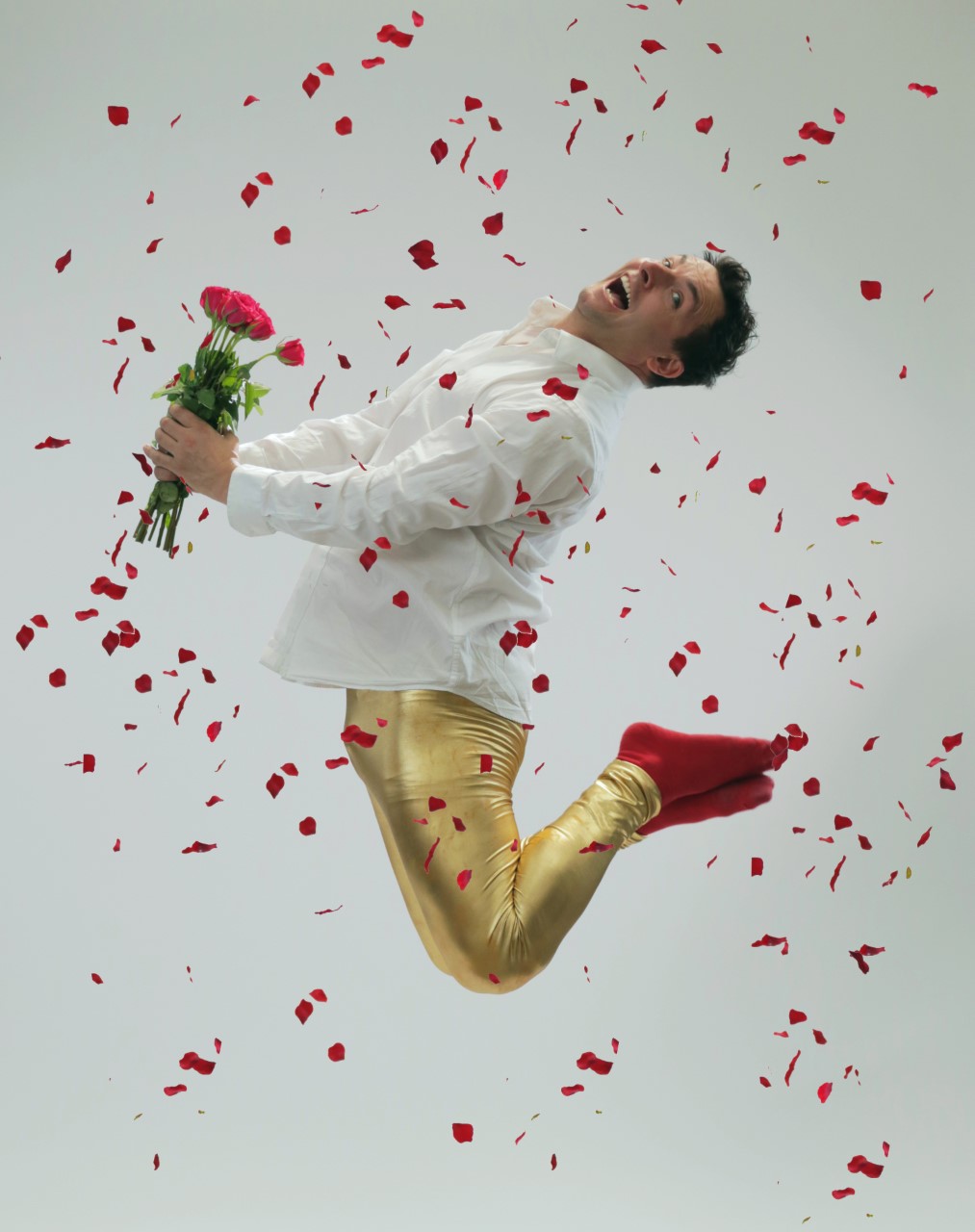 Ever on the prowl for promising shows warming up for The Fringe, The Edinburgh Reporter made haste to Birmingham Rep’s Be Festival this June.

Celebrating an eclectic and diverse programme of artist from across Europe we came across Sean Kempton’s ‘Stuff’. This will be his first Fringe solo show having already garnered critical acclaim for his work with Cirque Du Soleil.

Described as…’a journey through the fragility, hilarity and awkwardness that love can sometimes entail. It’s a love story, but not the one you’ve seen a million times before; this is another kind of love story. Using clown, mime and a little bit of dance, Stuff is playful, fun, sad and familiar.’

‘Opening performance Stuff is a one-man physical theatre/mime from Sean Kempton. Against a tableau of music pieces he explores the themes of birth, love and death. A deliciously teasing mime set to Thus Spoke Zarathustra has him emerging from the slithery environs of the amniotic fluid and placenta. Charming micro scenarios unfold on his tabletop as his headlamp spotlights a finger-feature samba dance. In the Love sequence, audience members are literally roped into a plaintive flamenco/Fado torch ballad. Inevitably, death makes his call with Mozart’s Requiem, as our character flails in rage at the dying of his light. But that was not quite the end, and Kempton puts the show to bed with a cotton-wool cuddly “amor vincit omnia” denouement. His full feature show at the Edinburgh Fringe promises to be a hot-ticket must.’ It seemed a compelling reason to find out more about this enticing artist.

SK: My name is Sean Kempton and I am a performer/director specialising in contemporary clown, circus and physical theatre. I trained at Rose Bruford School of Speech and Drama and at The National Centre for Circus Arts. Originally from North Devon I now live in London.

TER: There’s a delicious amount of love, care and creative angst gone in to this show, can we have a peek in to your creative mind-storms?

SK: For many years I have been away from the UK working on large-scale spectacle shows for Dragone and Cirque Du Soleil and I wanted to come home and start to establish myself back here. Having played to thousands of people at a time I wanted to make something that was far more intimate and honest without loosing any of the playfulness I get working as a clown.

I also want to challenge myself in how I work as a clown playing around with the form a little. Last year I did a show which was quite cabaret/Vaudevillian in style and whilst it worked very well with the audience I was left frustrated. It seemed so shallow and throw away so I started to look at how I could work with a deeper context, still get the laughs and buzz from the audience but move them at the same time.

TER: No spoilers now but , what is it all about? SK: It is about a few things really. I am very interested in human connection and when we choose or don’t choose people to make contact with. In my circus work I use a lot of volunteers and I have thousands of people to choose from. I am curious how certain people pop out of the crowd and it is never because they are loud or waving (these guys you really don’t want to use), there is something about them that draws you. It has happened a few times that I have picked people again after a few weeks break in different cities. There are some really interesting science studies on love and attraction finding the chemicals that spark this initial moment but sometimes I am drawn to people before I even see them. This I am curious about.

TER: All these ephemeral, abstract nouns dancing about! Rumour is though, there was a research methodology in your preparation?

SK: As a starting point I interviewed my daughter about Love. I found it very touching and made me curious to see how different ages found the same subject so I found people from 21 through to 83 to interview on the subject and this become a jumping point for most of the material.

TER: Is it in a sense autobiographic?

SK: I wanted to challenge myself to minimize everything and this also meant speaking. The only time I talk is when my daughter interviews me half way through the piece. I felt that the words were over explaining everything and I wanted it to be open enough for the audience to project their stories onto the piece making it hopefully a collective experience.

TER: The use of volunteers, a slight oxymoron there, maybe?

SK: Often people are terrified of participation, I understand, I also hate it. However I am have over 20 years experience working with volunteers and know how to make the public feel safe and have a lot of fun. For me if you are using volunteers as a performer you have to really listen to them and adapt to what they are giving you. Treat them with ultimate care and make them the hero. In no way is the focus on me but on the volunteer and I always making sure they succeed. I hate those routines that mock the volunteer to me that is just bullying.

TER: You seemed to have a lot of fun and were very well received at Birmingham Rep’s Be Festival this June. You only did one thirty minute, condensed version of Stuff but you hung out quite a lot afterwards.

SK: Be Festival was a really good experience for me not least because we were working with a large amount of talented Europeans on a week where the UK chose to leave. Part of the edict of the festival is to reduce your show to half an hour, which is a great discipline. It really helped me understand what my themes were and what I thought were my strongest sections. Editing is a very important skill and demands a lot of humility, you have to let go of some of your best bits to serve the piece as a whole. Also playing with a time restriction showed me how much more space I need in the piece allowing the show room to breath. Of course now my head is cluttered with new ideas but I will choose them wisely. The weeks are ticking down until I open in Edinburgh and I am very happy with the state it is in.

TER: Have you been before?

SK: Never! And I can’t wait. Over the 25 years I have been working as a performer I have never been. I think it is so useful for a show to run that many times in a row to mature it. I am pretty sure I will get every type of audience in and different sizes of house but this is the fun of it and with my show each one will be different as it changes depending on who I have in and what atmosphere we create.