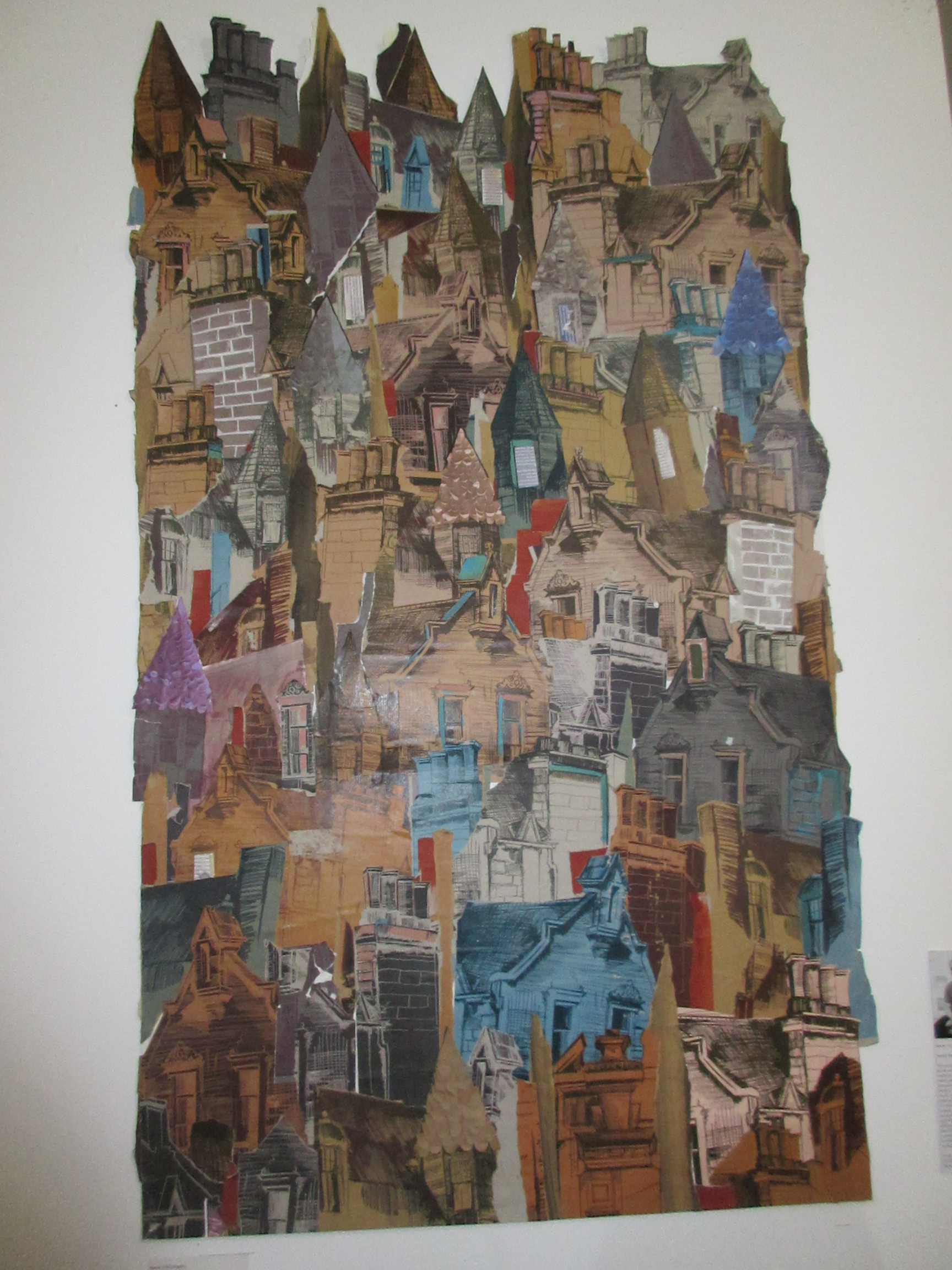 How many exhibitions have you been to where a student rushed to make you a cup of tea? How often have you been thanked for coming? One of the many joys of Leith School of Art is the warmth of its welcome; its late founders, Mark and Lottie Cheverton (who opened the school in 1988), specifically intended to provide students with more support and care than the art colleges of the time, in the belief that creativity thrives when it is nurtured. The quality and breadth of the work in the 2016 end of year Summer Show is yet another testament to their achievement. Lynsey E Mackenzie, the worthy winner of this year’s LSA prize for painting, has produced two huge works, Span and Flux; each is a mixture of sharp geometric lines and softer shapes, whites, greys and yellows, as shafts of light move, emerge and disappear, reflections shimmer and evaporate. She is interested in ‘the depiction of light as an active, dynamic force, creating a sense of flux, movement, shifts in time, and transience of presence’. Lynsey, who will next year study at Glasgow School of Art, came to painting only after qualifying in law and working in theatre administration – from the sophistication of her work one would think she had spent years developing technique, and I have no doubt we will be seeing more of her.

More outstanding pieces come from Jeevan Khurana, whose current practice is inspired by animals at Edinburgh Zoo. His The Whoop shows birds flying through the air; its slightly abstract nature reminded me of some of Christopher Orr’s work for The Beguiled Eye at Talbot Rice in 2014 – the glimpse of a claw clutching a branch, the play of light as leaves fall. Crane in White, meanwhile, beautifully captures the bird’s spiky walk, while A Portrait of Penguins’ Rock is full of humour and movement. Jeevan, whose earlier work was based on the outback of his native Australia, wants to ‘build upon a framework of the formal or accurate recording of information to develop the image toward the abstract and expressive such as to capture the experience of the subject’. In these paintings he has certainly achieved this. Printmaking is strong in this show. Angela Chisholm’s exquisite prints of impalas, elephants and zebras – all animals from her native South Africa, where ‘the rivers were full and the grasses abundant and high’ – reward careful study; she has managed to suggest movement and character in relatively simple shapes. Anna Malyon says of her glorious series (two in colour, one in striking monochrome), The Clockmaker, The Sum of Her Parts and Be King of your Catdom, ‘There have been many decisions to make and battles to win. But in the end it was as though the characters themselves persisted to their own unique outcomes’. Each print is full of fascinating detail and I especially liked the the vibrant colours of The Last Horologist (The Clockmaker).

Sylvia Quinn Home also shows some very interesting prints in Shadow Variations, made with reductive lino plate. A sequence of seven identical scenes, but in tones ranging from the palest green to pink and blue, suggest different moments captured in time and show just how much colour can alter the way we see, and respond to, an image. Mark Cheverton was an acclaimed printmaker, and this exhibition amply demonsrates just how well the tradition is continuing at Leith.

Although painting, drawing and printmaking form the bedrock of the school’s work, other media are also explored. Eric Kons’ project is based on cult American singer-songwriter Tom Waits’ play Frank’s Wild Years (first performed by the acclaimed Steppenwolf Theatre Company in 1986). This is the story of a man who burns down his house, takes his accordion and hits the road, not altogether successfully. Intricate drawings of stages, an iron bedstead in the middle of a road (Innocent When you Dream) and Gothic buildings, meticulously illustrated tarot cards and a charming 3D theatre create an engaging miniature world.

Marianna Pachacz’s Sync or Swim is an unusual and entertaining interpretation of both the Venus myth and the synchronised swimming of old Busby Berkeley films; a video shows the goddess rising from the kaleidoscopic abstract patterns made by the swimmers, and these are repeated in small panels of fabric, tissue paper and thread. Another piece that I liked very much was Emily Hopkins’ Forgotten Home, a collage of buildings reminiscent, perhaps, of the Old Town; Emily was inspired by the set miniatures in Wes Anderson’s Grand Budapest Hotel which, as she explains, were ‘central to adding to the bizarre and other-worldly atmosphere of the film’.

More impressive painting comes from Cally Buchanan, whose Bowl of Fruit is full of texture and muted white light; the curve of the bowl is particularly moving. By contrast, Gillian Penney’s Loch Gairloch and Forth Road Bridge are almost print-like in quality, with striking, clean shapes and lines and an appealing simplicity. Elspeth Callaghan’s Yellowcraigs made me see a beach I know well in a new way; her landscape is one of rocks, pools and reflections – in which she has found colours that I have never noticed, but instantly recognised. There are some excellent portraits in this exhibition. I especially liked Mike Miller’s sculpted head Pete and Charlie Yates’ fabulous picture of Ragnar (below). Charlie has certainly succeeded in his aim of letting the viewer ‘see something of his subject’s individuality and uniqueness through the use of expressive paint techniques and a contemporary drawing style’; like Lynsey Mackenzie, Charlie will be studying at GSA next year. It is impossible to mention every piece here, but each one shows a high level of accomplishment. More work was exhibited in LSA’s St James’ campus and at Patriothall Gallery, but unfortunately time constraints prevented me from visiting these. Some students have only been at Leith for a short time, others have spent every day here for a year, or are completing their third or fourth course; the school has allowed every one of them to achieve their very best work and – as is evident from the many enthusiastic artists’ statements – to enjoy doing so. That, I think, is what Leith is all about; the honing of technique combined with the freedom to experiment; hard work supported by care for each artist as an individual; creativity at its very best.

For information about the courses (full time and part-time) available at Leith School of Art, call 0131 554 5761 or take a look at the LSA website here. LSA also runs low cost drawing and painting classes for people who are in receipt of benefits or are on a very low income.