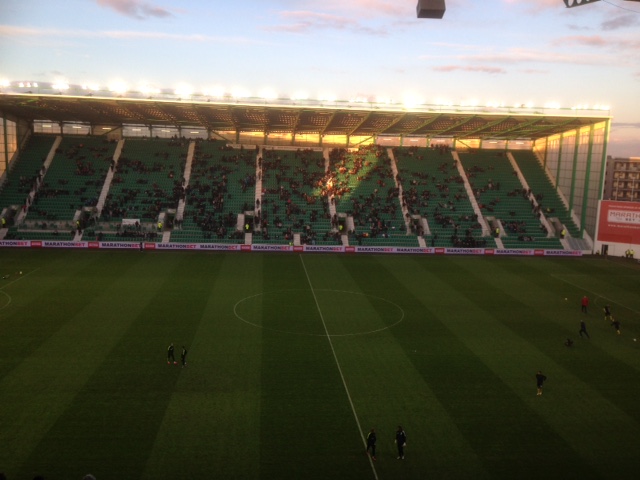 Hibs returned to winning ways tonight thanks to a sensational wonder strike from substitute Martin Boyle 13 minutes from time.

Livingston led for much of the game and looked to be heading for a shock victory before Anthony Stokes equalised and Boyle produced the goal of the season to secure the three points.

The result means that Hibs are now three points behind second placed Falkirk with two games in hand, and the Bairns visit the capital next week for a game which could go a long way in deciding who gets promoted along with Rangers who won the title tonight.

Head Coach Alan Stubbs made two changes to the starting XI that drew 2-2 with St Mirren in Paisley on Saturday. Goalscorer Farid El Alagui made his first start of the season, replacing Martin Boyle whilst veteran midfielder Kevin Thomson took over from Marvin Bartley.

There had been speculation that Otso Virtanen would start in goal to gain some first team experience before the Scottish Cup semi final on 16th April however Stubbs stuck by first choice Mark Oxley.

Fraser Fyvie who missed the last 12 games after picking up an injury against Morton was listed amongst the substitutes.

Hibs started brightly and John McGinn almost opened the scoring in the second minute. The Scotland international picked up the ball in midfield, beat three defenders and fired in a strike from the edge of the area which Keeper Marc McCallum tipped round the post.

Jason Cummings almost added a second but his effort flew over the bar then David Gray got on the end of a fine Anthony Stokes cross but his header was blocked on the line.

As has happened so often this season however it was the visitors who took the lead against the run of play when the Hibs’ defenders failed to clear a cross into the box and the ball fell to Jordan Whyte who fired it past Mark Oxley from 10 yards.

Liam Henderson then set up Gray with a superb through ball but the full back could only divert the ball past the post.

In the 37th minute, El Alagui went down injured and was replaced by James Keatings, then in the last attack of the first half Hibs had a penalty claim denied when a Gray cross appeared to strike the arm of a Livingston defender but the referee waved play on.

The Hibs players left the field to a chorus of boos from the frustrated supporters but came out in the second half with all guns blazing, winning three quick corners which were all cleared.

The Lions kept two players up the field and looked dangerous on the break as Hibs threw everything into attack.

McCallum did well to save a Henderson free kick, but the keeper’s time wasting tactics annoyed the home support who were becoming more and more restless.

In the 67th minute, Martin Boyle replaced Kevin Thomson who had performed well in midfield and the winger was quickly in action playing a one-two with Gray before firing in a low cross which Stokes flicked inches past the post.

Hibs eventually equalised in the 74th minute when a Cummings flick found stokes at the edge of the box and the on-loan striker  produced a powerful shot which flew past McCallum into the bottom left hand corner of the net, sparking wild celebrations from the home fans.

Three minutes later, Easter Road erupted when Boyle scored a goal fit to win any game. A  Henderson free kick was headed clear into the path of Boyle who volleyed a screamer from 25 yards which flew into the top left hand corner of the net leaving McCallum stranded.

Cummings almost added a third moments later after good work by Keatings but his effort struck the Livingston keeper’s chest.

Niklas Gunnarsson replaced Cummings in the 90th minute and Hibs survived a scare when Livingston won a late corner but the defence stood firm and the supporters, players and management produced a collective sigh of relief when the referee blew the final whistle.

Afterwards Stubbs said: ” I’ve seen the goal and it’s WOW. We’ve just seen the goal of the season. I haven’t seen a better goal than that.”