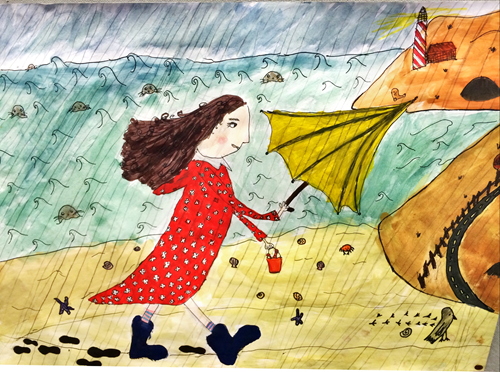 Alba Cooke Ribes who is a P5 pupil at Hermitage Park Primary School has won the John Byrne National Drawing Competition beating thousands of others who entered.

She attended the award ceremony at Paisley Museum and Art Gallery which has a special exhibition of the entries over two years.

Keira Grieve (S3) from Tynecastle High and Evie Jardine (P6) from South Morningside Primary were named as runners up who received a commendation from John for their artwork. 25 other young artists from schools across Scotland were also commended as runners up for their work by the renowned artist and playwright. John Byrne, said: “I’m really pleased to announce the winners of this year’s John Byrne National Drawing Competition and I’d like to offer my congratulations to Alba, Amy and Georgia, and all the other entrants who took park.

“The winning artwork was chosen as it initially caught my eye during the judging process then on closer inspection, just blew me away with the young artist’s use of materials, composition and colour, that really helped their entry stand out against the work of other competitors.

“The young people in our country never cease to amaze me with their artistic skills and extraordinary talent, and that has come through in this year’s entries. The standard of work has been fantastic and I hope that the competition has inspired many of the young entrants to continue to enjoy art and draw more.”

Alba received the first prize of a limited edition full colour print by John, a £100 voucher for art materials and a £25 book token. Second and third placed winners each received a limited edition print by John, £50 and £30 voucher for art materials, respectively, and a £25 book token. The 30 runners up received certificates specially designed by John himself.