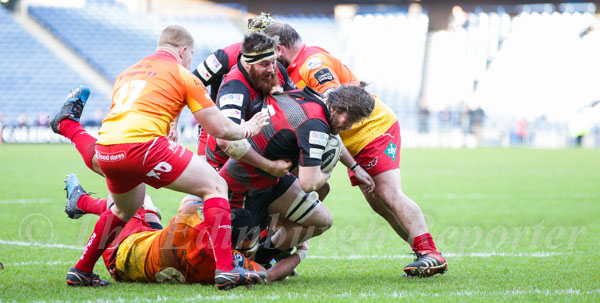 Before the match, Edinburgh were on 38 points and in sixth place in the Guinness PRO12 League, equal on points with Ospreys and Munster in seventh and eighth so a win at BT Murrayfield against third placed Llanelli Scarlets was, more or less, a ‘must’ if they were to, at the very least, retain their place.

With that in mind, it was to prove Oh, so close by the end of play on Sunday.

Edinburgh started well, pressing Scarlets back into their half and winning an early penalty from a scrum, which, full back, Blair Kinghorn put over from 40 metres for the opening score, but the visitors struck back within a couple of minutes with an equally long range effort from stand-off, Aled Thomas, to level the scores at 3-3 with eight minutes played.

From the restart, play once again moved into the Llanelli 22, where Edinburgh won a scrum for a failed interception attempt by a Scarlet’s hand which could have been a penalty for deliberate knock on, but the officials saw it differently and scrum out on the 15 metre line it was. Winning the ball, Tom Brown came off his wing and attacked up the centre. From the ensuing ruck, near the five metre line, centre Sam Beard, broke away to the left and offloaded to No. 10, Phil Burleigh who had a clear run in to the line for the try. Kinghorn knocked over the conversion and, with 13 minutes on the clock, the score was 10-3.

But, once again, within a couple of minutes another penalty give-away from Jamie Richie from a ruck infringement gave Thomas another shot at goal to close the gap to 10-6.

And, as if that wasn’t bad enough, it took Scarlets another minute, or so, to up the ante with a try. Once again, Edinburgh deal with the restart poorly and, in his desperation to get the ball away, Cornell du Preez threw a loose pass which was gathered up by centre, Hadleigh Parkes who then had an equally clear run – albeit 40+ metres – in to score Scarlets’ first try. However, Thomas missed the kick, but the visitors were now in the lead 11-10.

The home side then pile on the pressure for the next period of play, pinning the Welsh side back in their half and forcing a number of clearance kicks off the back of rucks. Pressure is rewarded as, on the 22 minute mark, it’s Scarlets turn to be penalised at the breakdown and Kinghorn stepped up to successfully regain the lead with a three-pointer and 13-11 on the score board. A couple of minutes further into the match, yet another daft penalty gave Thomas the chance to retake the lead for Scarlets, but he missed, but the visitors run the clearance back through centre, Regan King, who drove deep into opposition territory, setting up the play which, eventually, moves the ball out to Jamie Davies, who then barrelled over in the corner for his try. With Thomas having a bit of a kicking nightmare, the conversion attempt hit the bar, so the visitors’ lead is held to 16-13.

With five minutes left to play, Scarlets have, successfully ‘repelled all boarders’ and once again threaten Edinburgh’s try line. And it’s a threat which pays off as, spreading the ball wide, Steff Evans piles through Beard to score in the corner. Thomas then managed to score the conversion from the touch line, so 23-13 is the score as half time loomed.

And, just as the break is about to be called, Kinghorn gets another chance at goal and his successful penalty, meant that the teams went in to the break at 23-16 to Scarlets.

The second half started very much as the first had, with an early, successful, penalty from Kinghorn to close the score up to 23-19.

Edinburgh then kept the opposition in check from the restart, forcing them the kick, but, with 45 minutes on the clock, Edinburgh win a penalty which Burleigh kicked for touch and put the home side on the five metre line for a line out. Despite their best efforts, the pack fail to make ground so the ball was swung across the field, where right wing, Damien Hoyland broke through a couple of tackles but he is stopped short. Burleigh then collected the ball from the ruck and made a bee-line for the whitewash. He was stopped short, but he then scrambled over for ‘the try’. The TMO was then brought into play and the decision was ‘No try’ for a double movement, and a penalty to Llanelli.

The next 20-ish minutes of the match were played in the centre of the pitch, with neither side able to make any sort of meaningful progress and the match, at times, degenerated into a bit of a kick fest as neither side were prepared to take a chance.

With 12 minutes left to play, that all changed. Edinburgh’s pack get the ball into the opposition 22 and, a couple of quick recycles later, sub, Chris Dean, came of his wing and broke through some fairly poor tackling to bring the ball inside the five-metre line. The ball was quickly recycled and into the hands of Ben Toolis who crashed over the whitewash for the score leading try. Kinghorn, unfortunately, hit the post with his kick, but at 24-23, Edinburgh are back in the lead. It’s a lead that looked a bit short lived, too, as less than five minutes later, Thomas had a long range effort to retake the lead. But, as one spectator pointed out, ‘He’s not had a great day with the boot’, a remark which proved prophetic as his kick was wide of the mark.

And that was it. A bit of to-ing and fro-ing resulted in not a lot and Edinburgh ran out narrow victors 24-23