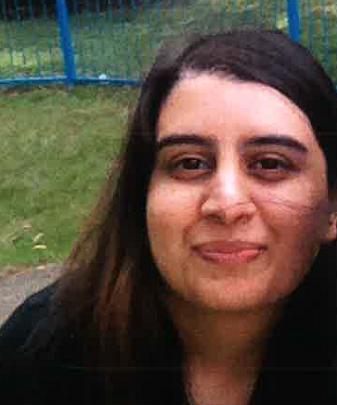 Police have confirmed that  the body found in the Gogar area of Edinburgh last month is that of Saima Ahmed from London.

The 36-year-old was discovered on the afternoon of Saturday 9th January 2016 off Gogarstone Road prompting a major investigation involving a detailed forensic examination of the area.

After carrying out specialist forensic techniques, including DNA analysis, investigating officers have now ascertained that the remains are those of Saima who had been reported missing by her family to the Metropolitan Police Service on the 31st August 2015.

Her death is currently being treated as unexplained and specially trained officers are providing support to the Ahmed family as inquiries progress.

As part of the ongoing investigation, Police Scotland is today launching a UK-wide appeal for information as officers endeavour to establish the exact journey Saima took from London to Edinburgh, what took her to the Gogarstone area and the events leading to her death.

The investigation thus far has led detectives to believe she most likely travelled by rail on Sunday the 30th of August last year.

Saima’s movements on that day are as follows:

9:57am – captured on CCTV alone in High Road, Wembley

10:00am – High Road, Wembley – ATM outside Natwest Bank – Saima is believed to have withdrawn money from her account.

10:18am – Wembley Central Railway Station – boards a London Overground service bound for Watford Junction. She appears to have been alone.

11:06am  – believed, but not confirmed, to have boarded a train bound for Northampton.

Her exact route after this time is unknown however police believe she may have travelled to Hemel Hempstead, Birmingham and then onto Edinburgh.
Officers are keen to speak to anyone who remembers Saima or who may have spoken to her to come forward.

“I have met personally with Saima Ahmed’s family and have passed my condolences to them at this tragic and extremely difficult time.

“I have given them a commitment that we are doing everything we can to establish why Saima travelled to Edinburgh and the exact circumstances that led to her death.

“At this stage of our inquiry we continue to treat Saima’s death as unexplained however there is no evidence of criminality as matters currently stand.  Clearly there are a number of matters and facts we have yet to establish and it remains a mystery to Saima’s family why she travelled to Edinburgh.

“Today I am appealing to anyone who saw Saima on, or around, the 30th of August 2015 to please contact police immediately.

“As part of our ongoing investigation we continue to work closely with our colleagues in the various police forces across the UK where we believe Saima had travelled en route to Scotland and Edinburgh, including the Metropolitan Police Service and the British Transport Police.

“I urge any regular rail users who may have been on these services to please think carefully and to get in touch with Police Scotland on 101 if you remember or spoke with Saima.

“I also want to hear from anyone who saw her in Edinburgh, or who can help explain how she made her way to the Gogarstone Road area, whether by tram, train, taxi, private hire car or any other means.”

“She was a very loving and caring person who was part of a very close family.

“We are hoping someone can provide some information as to Saima’s journey on the 30th of August 2015 and help us to understand what happened to her.

“We would appreciate it if we are left alone at what is still a very difficult time for us. Thank you.”

To help jog memories, Sunday, August 30th, 2015, was the penultimate day of the Edinburgh Festival Fringe and “Fight Song” by Rachel Platten was at the top of the charts.  It was also around this time that “We Are Your Friends” opened in UK cinemas and X Factor had returned to our screens the day before.

Anyone with information should contact Edinburgh CID on 101 or Crimestoppers anonymously on 0800 555 111.