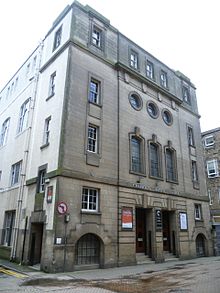 The council’s planners will recommend to councillors later this week that the former church at the west end of Rose Street will be turned into a restaurant with rooms.

Following a lengthy passage through the planning process during which many voiced their objections to the move, it seems that the west end of Rose Street will become a major new venue for owners, Glendola Leisure Limited

In 2014 an application for converting the building to a ‘superpub’ was refused, but this new application by the company which also owns Waxy O’Connors in Glasgow is being accepted by the planners.

There will be a 124 cover restaurant on the ground floor and a bar in the basement for 64 in the restaurant and 48 people standing at the bar, with 22 serviced apartments in the space above. Two new floors will be formed with a guest lounge on the first floor. Although this is a listed building, and despite objections from Historic Environment Scotland, it appears that the interior alterations are being permitted as the exterior changes will largely be unseen.

The West End Community Council were supportive of the development on the basis that the historic building will be kept in use, the former congregation having moved out to new premises on Shandwick Place. But they did stipulate that the opening hours will have to be strictly regulated by the licensing board.

At the same meeting this week the advertising giant JC Decaux the company which puts up the council’s bus shelters with digital advertising panels, faces no fewer than nine refusals in reply to its applications for advertising sites on George Street.

The bus shelters on Princes Street have now become part of the landscape, with photographers using the uniform light spilling from them as a kind of arty feature in shots from Calton Hill, but it seems that the planners do not want them on George Street.

The planners have said that there is no digital advertising on the pavements on this street which is an integral part of the Edinburgh World Heritage Site and the New Town Conservation Area. The advertising company proposed digital illuminated panels on both ends of the bus shelters each with around 2 square metres of advertising space.

The shelters will go ahead as these do not require planning permission but the advertising panels are being kicked into the long grass in this ‘visually sensitive location’. The planners say that digital advertising panels would damage the unique and special historical character of the street and would detract from the views from one end to the other.

The proposed new hotel on the site of one of the surface car parks at Ocean Terminal will also be discussed on a preliminary basis although no decision will be made at this meeting.

You can follow the meeting live on the council’s webcast here.