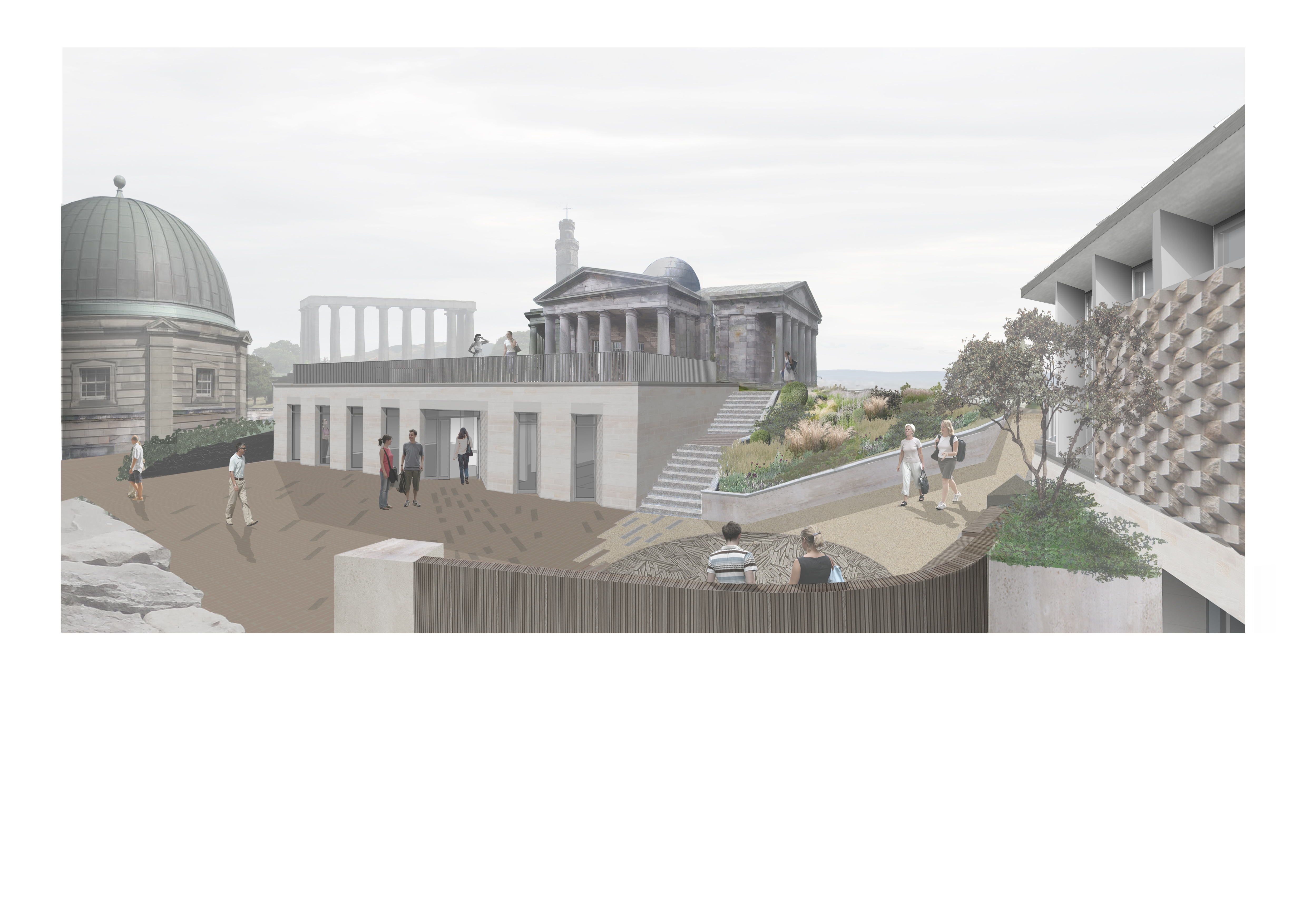 The project will mean that one of Edinburgh’s most iconic sites is saved for future generations, creating a newly-built gallery and restaurant opening this historic site to the public for the first time in its history.

Leading contemporary visual art organisation and gallery, Collective is working in partnership with The City of Edinburgh Council to redevelop the City Observatory as their new permanent home.

The building lies on Calton Hill, one of Scotland’s first public parks and is a jewel in the crown of the UNESCO World Heritage Site. It was the birthplace of astronomy and timekeeping in Edinburgh and forms a vital component in the group of buildings on Calton Hill which are both architecturally and culturally significant to the history of the city and the nation, and contribute to Edinburgh’s status as the Athens of the North.

The City Observatory was designed by William Henry Playfair in 1818 as a temple to the Enlightenment, scientific innovation and discovery. It is of great architectural importance,but requires major investment and conservation as it is in a state of disrepair and on the Buildings at Risk Register.

With the City of Edinburgh Council, Collective will work to conserve and reinstate the original 18th Century Playfair designs, display and interpret the telescopes and astronomical instruments and open the building to the public with education and gathering spaces. The grounds will be restored and a  subterranean gallery and restaurant will be created.

Collective have operated from Calton Hill since early 2014 after restoring the City Dome and opening it as as a gallery showing the work of established and international artists who have not exhibited in Scotland before. This space has attracted huge numbers of visitors to the site, interested in the historic building and its exhibits of contemporary culture.

Working with Collective Architecture on this first phase, they have now been appointed to develop and take forward the plans drawn up by Malcolm Fraser Architects, for the rest of the site. This world-class complex will combine innovative art and iconic heritage, creating a new synergy, for the enjoyment of and benefit to the public and place with contemporary art at the heart of one of Edinburgh’s most popular locations. Whilst the majority of funding for this £3.5m project has been raised, Collective is continuing to raise funds in order to start on site early 2016 and aim to open up the entire City Observatory walled complex early 2017.

Kate Gray, Collective’s CEO and Artistic Director, said: “We are delighted that the plans for the site have been approved which will enable Collective to make the City Observatory on Calton Hill our new permanent home.

“The unique site will have a new future bring together contemporary art with the historical innovations the site was associated with in the past, creating an inspiring and exciting environment for both artists and visitors. Historically observatories are places to observe the stars and make scientific discoveries but Collective’s vision is to be a new kind of City Observatory, a place to look at art and view the city that art was made to be seen in.

“We will bring people together to engage with art, science, and Edinburgh’s heritage.”

Cllr Richard Lewis, Culture and Sport Convenor for the City of Edinburgh Council said: “The redevelopment of the Old Observatory on Calton Hill could be one of the most significant cultural and heritage projects to take place in the city.

“Known as the birthplace of astronomy and timekeeping, and situated with breathtaking views in the heart of the Athens of the North, the Observatory would be reinstated to the original 19th Century William Playfair designs under Collective’s plans in order to create a hub of history, science and art for residents and visitors to enjoy. The decision today is an important step on that journey.”