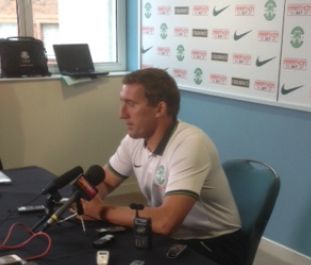 With the transfer window closing on Tuesday, Hibs’ Head Coach Alan Stubbs insists that he is working hard to bring in at least one new face to add to his squad.

Last week Hibs were linked with Jon Daly who was released by Rangers however the Irish striker elected to sign for Raith Rovers and actually played for them at Easter Road yesterday.

The club was also linked with Billy McKay, the ex Inverness Caledonian Thistle striker who is currently at Wigan however he chose to move to Dundee United on a season long loan deal.

The third name was Stevie May, the former St Johnstone and Scotland striker who moved to Sheffield Wednesday in a big money move last summer. The suggestion was that May would either move to Hibs or Rangers on loan however that deal has gone quiet.

The good news for Stubbs is that summer signing James Keatings made his first start against Raith Rovers, scoring the first goal and teaming up well with Jason Cummings whilst Farid El Alagui is close to returning to training following an operation in the summer.

After yesterday’s victory, Stubbs was questioned about his transfer plans and said: “We are still looking and are still in the hunt to do something and we will just wait to see what happens.

“I said that if I had to wait till Tuesday then I would but if I could do something before that I would, so I’m sure it’s going to be an active weekend where my phone is going to be getting rung quite a few times.

“I’m happy with what I have got but obviously our intentions are to bring someone else in and we will be working really hard to do that. There is still things out there that we can potentially do so would I be surprise if nothing happens? Yes a little bit of me would but we will have to wait and see what happens.

“We are quite a bit forward in identifying players so from that point of view that is always a good start if you have someone in mind.”