The Penguins are back! – Drylaw & Telford Community Council – The Dogs Edinburgh – One for the golfers – Tonight at Summerhall

Edinburgh Zoo’s five king penguins have returned to Penguins Rock just in time for the re-launch of the penguin parade today at 2:15pm.

The penguin parade has been a major attraction at Edinburgh Zoo since 1951 when a keeper left the enclosure door open and a gentoo escaped. Instead of recapturing the gentoo, he decided to see what happened and followed by other penguins, they marched down the walkway of the Zoo to Corstophine Road and back again.

The parade stopped in early 2012 when the penguin enclosure was closed for renovations and a number of the penguins were sent to other collections during the makeover. Since returning to the Zoo and the official opening of Penguins Rock on 14th March, the Gentoo penguins have been participating in regular refresher sessions with their keepers.

“We have a mixture of both old and new birds taking part in the parade, with as many as seventeen birds participating in the practice runs. The practice runs have all gone pretty smoothly; the old pros got back into it right away and the new penguins were enthusiastic to join in.

“Penguins are naturally inquisitive and they enjoy the opportunity the parade gives them each day. We don’t force any penguins to take part, or encourage them with food rewards – each penguin participates in the parade purely because it wants to.”

As part of the new Penguins Rock experience, the penguins will now walk over a series of commemorative penguin footprint stones featuring personalised dedications to loved ones that were purchased as part of the Penguins Rock Appeal, which raised over £138,000.

The kings were delayed in their return as the warmer weather in England meant they started to moult earlier than usual. As moulting can be a little stressful for penguins the Zoo decided it would be best to wait for the birds to finish moulting before bringing them back. With them is Sir Nils Olav, one of the Zoo’s most famous residents and the only penguin to have been knighted.

Colin Oulton continues:-“It was actually Sir Nils Olav holding everybody up as he was the last to moult! As the kings have only just returned to the Zoo this week it is unlikely that any of them will be getting involved in the first official parade, but it won’t be too long before they are settled and ready to participate.”

Drylaw & Telford Community Council have a sparkly new website which you can see here. The council members are Chairperson Alex Dale, Secretary Ian Greenhalgh and you can contact him on this email address Secretary@drylawtelfordcc.co.uk and the Treasurer is Jackie Browne. 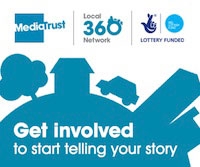 The Dogs in Hanover Street are looking for a sous chef and a chef de partie. If you have those skills then email your cv to them at info@thedogsonline.co.uk – and tell them we sent you!

This has nothing to do with Edinburgh except that we know many of you are avid golfers and possibly awaiting a break in the white stuff to get out and hone your skills on the greens and fairways around the city. Perhaps you could try this shot when you are on the course next time…

Tonight at Summerhall The Skinny tell us that you are in for a night of poetry, music and film. All for £7….

Our photo today is of Dame Elizabeth Blackadder and you can read more here.