John Longstaff is the Independent candidate for Almond Ward.

He has supplied his biography for us now and a photo is on its way.

John Longstaff is standing for election in Almond Ward.  He is independent of any political party and has always been his own man.  John is a civil servant who believes that the most important part of being a Councillor is to put constituents’ interest first; unfortunately this is not always possible when you affiliate to a political party.

John was the City of Edinburgh Councillor for Dalmeny/Kirkliston ward from 1999 to 2007.  During his time as a Councillor, amongst other things John served as a spokesman on Sport, Leisure and Cultural affairs, worked hard as member of the Planning Committee, and chaired the Environmental Quality Scrutiny Panel and the Police Board Audit Committee.  He was also sworn in as a Justice of the Peace.  He frequently attended meetings of the many Community Councils and School Boards with an interest in the ward.

Dalmeny/Kirkliston ward included the Settlements of Kirkliston, Dalmeny, Newbridge, Ratho Station and Ratho village, where John has lived since 1995.  These settlements, apart from Ratho village, make up about a third of the current Almond ward.  Living in the rural west of Edinburgh, John is very familiar with the issues and pressures faced by residents on this side of the City.

John is married to Jacqui, a sub-postmistress, and they have 3 children, Jake, Jessie and Jenny.  John actively follows the fortunes of the Scotland XV, Sunderland FC, Heart of Midlothian FC and the Jags.  He qualified as a rugby coach in 1998, has an honours degree in Education and used to be a computer consultant.

John can be contacted at elect.john.longstaff@gmail.com 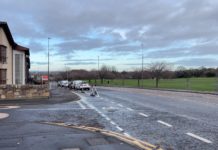