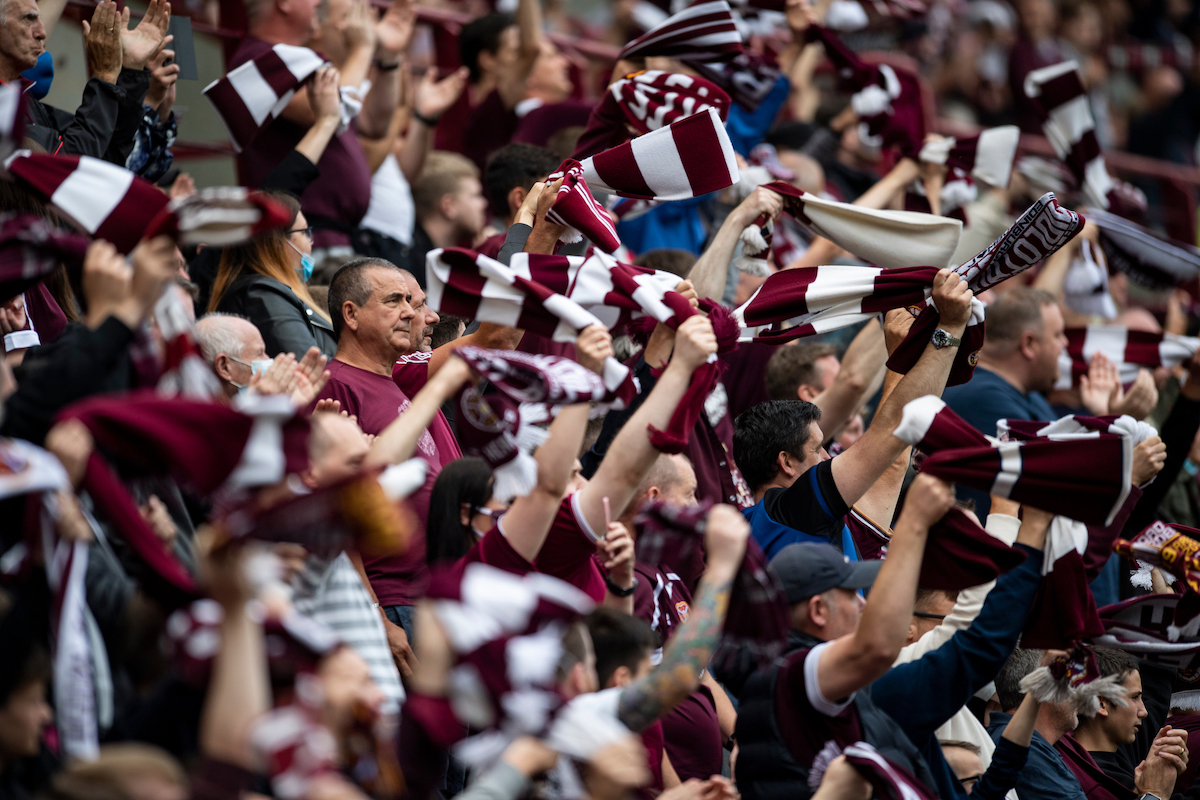 Ten weeks on from Hearts’ Scottish Cup Final defeat to Rangers, the team was back in front of a sold out home end for the opening game of the new cinch Premiership campaign against Ross County.

A new contract for manager Robbie Neilson and a new number nine in the shape of Lawrence Shankland, which perhaps surprisingly relegated the Jambos top marksman last season, Liam Boyce, to the bench.

As for the visitors Ross County, they had also experienced a summer of change with star players moving on in the shape of Regan Charles-Cook and Blair Spittal, alongside Joseph Hungbo, who returned to his parent club Watford after his loan in Dingwall.

Prior to the match the Hearts fans in the Wheatfield Stand unveiled a massive display that read ‘Busby 8’ in memory of former club legend Drew Busby, who passed away at the start of July. An emotional minutes silence was also observed.

Coming to a raucous Tynecastle on the opening day of the season, can be a daunting experience, just ask Celtic, but the Staggies had started well and after a well-timed run from Owura Edwards, Jordy Hiwula dragged a shot wide from the edge of the area.

By the 20-minute mark the Hearts fans were becoming increasingly anxious as Ross County continued to impress and the home side were reverting hopeful balls forward when in possession.

Hearts were definitely riding their luck, despite the visitors not testing Craig Gordon, but then two huge chances came and went for the visitors. Firstly, Dominic Samuel’s glancing header came back off the post and into the arms of Gordon, before the lively Owura skipped away from Atkinson and curled a magnificent effort towards the far corner. Fortunately for Hearts, the crossbar came to their rescue.

After struggling to string two passes together for the previous 45 minutes, Hearts almost took the lead in first half stoppage time. Alex Cochrane got to the by-line and cut the ball back for Barrie McKay, who’s scuffed effort was almost turned home by Michael Smith.

Hearts were never going to be as poor in the second half and they almost took the lead after 53 minutes. Alan Forrest cut in from the left and his effort appeared to be curling into the bottom corner, but former Hearts man, Connor Randall was perfectly placed to divert the ball behind for a corner.

That was a let off for County, but they were not so lucky six minutes later as this time Forrest did find the back of the net. Alex Cochrane had looked dangerous at times in the first half when getting down the left, so it was no surprise to see the goal come up that side. Forrest was the receiver from Cochrane’s cross and Hearts had the lead courtesy of the former Livingston midfielder.

Hearts appeared to wrap up the points 13 minutes from time and again Cochrane was involved. His lofted past found Barrie McKay sandwiched in-between two County defenders. McKay brought the ball down perfectly, before committing Ross Laidlaw to go to ground and when he did he knocked the ball past the goalkeeper and tapped the ball into the empty net.

Before the Hearts fans had finished celebrating however, substitute Jordan White halved the deficit. The big forward sprung the offside trap and volleyed the ball through the legs of Craig Gordon to set up a tense final ten minutes.

Tense it was, but Hearts did indeed see out the remainder of the match and make it three points from a possible three ahead of next week’s Edinburgh Derby.