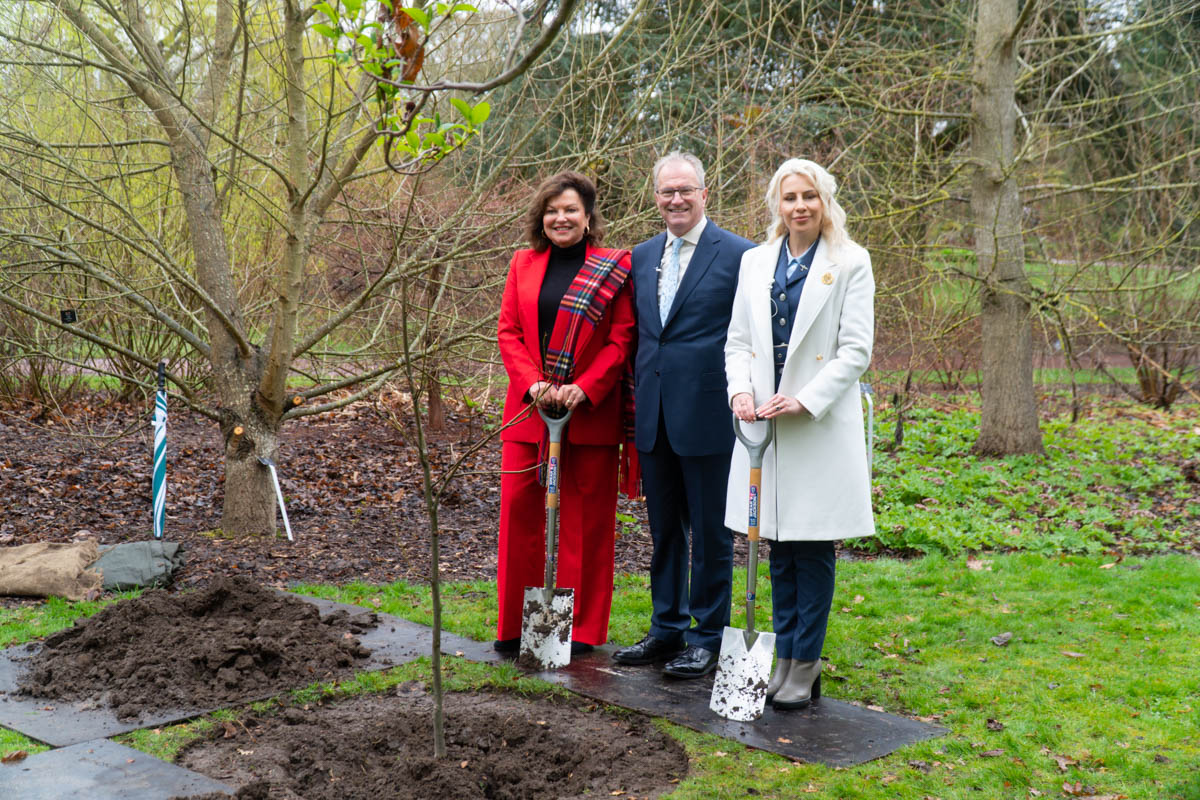 On a drizzly Edinburgh morning, Californian Heidi Kuhn was all smiles as she planted a hickory tree at the Royal Botanic Garden Edinburgh accompanied by the Regius Keeper, Simon Milne and Her Serene Highness Princess Angelika Jarosławska Sapieha of Poland.

The tree was planted to mark the 25th anniversary of the charity which Mrs Kuhn and her husband founded – Roots of Peace – which aims to turn mines into vines. Landmines remain a threat to people all over the world and the charity replaces these with vineyards and orchards. First the charity partnered with others undertaking the work of mine clearance, such as the HALO Trust in Afghanistan where more than 100,000 landmines were removed in the Shomali Plain.

Mrs Kuhn explained that she has Scottish ancestry with ancestors born in 1701 in Old Kilpatrick who then sailed to the eastern seaboard of the US, moving to California through the Panama Canal. She said: It is the greatest honour to be here to invoke peace at a time in our world when we need to turn swords into ploughshares, guns into shovels, and mines into vines.

“I hope with this incredibly symbolic tree to plant peace on the terra firma of my homeland of my ancestors.”

Regius Keeper Simon Milne MBE said that as a former Marine he knew only too well the damage that mines can do. He said: ” I have seen the effect of mines, devastation of property and farms, and I have seen into the eyes of those who in areas of desolation have to, somehow, rebuild their lives and livelihoods.

“Plants are at the very heart of what we do here at RGBE. We are now in our 352nd year and the knowledge, skills and passion gained over the years is evident through our collaborative work in over 40 countries including the Middle East and Afghanistan. All known life depends on plants, yet 40% of plant species are threatened with extinction and associated impact of all communities across the world. As we stand together here the synergies of our two organisations are apparent not only through addressing the practical issues, but also by giving all important hope for a better world.”

The Asia Scotland Institute, and its founder Roddy Gow OBE accompanied Mrs Kuhn during her visit to the Botanics assisted with the arrangements to enable the planting to take place.

Her Serene Highness works in a variety of non-profit areas, also in Afghanistan. She founded the Foundation for the Remembrance of Polish Pilots fighting as 303 squadron. The body organised the Memory Rally 44 a 6000km cycle ride which commemorated those soldiers who died in Afghanistan and Iraq.

Roots for Peace introduced grape trellising, and now the grapes on the Shomali Plain flourish, allowing peace through agriculture, and ensuring economic sustainability for thousands of farmers.

The charity has planted more than six million fruit trees in Afghanistan in the last 20 years which Mrs Kuhn suggested creates carbon credits and allows the charity to meet its mission to define, replant and rebuild.

Mr Milne explained the tree is a Carya aquatica or water hickory. He said: “Fundamentally a wetland species it tolerated not only wetter soil but a wider range of soil moisture than any other hickory growing well even on heavy soils which are waterlogged in winter but desiccated in summer. A symbol of endurance, seeds were collected in South Carolina in 2014 at sunset in late summer on the banks of the Savannah River at Little Hell Landing Point – a location I am told far more appealing than the name suggests.”