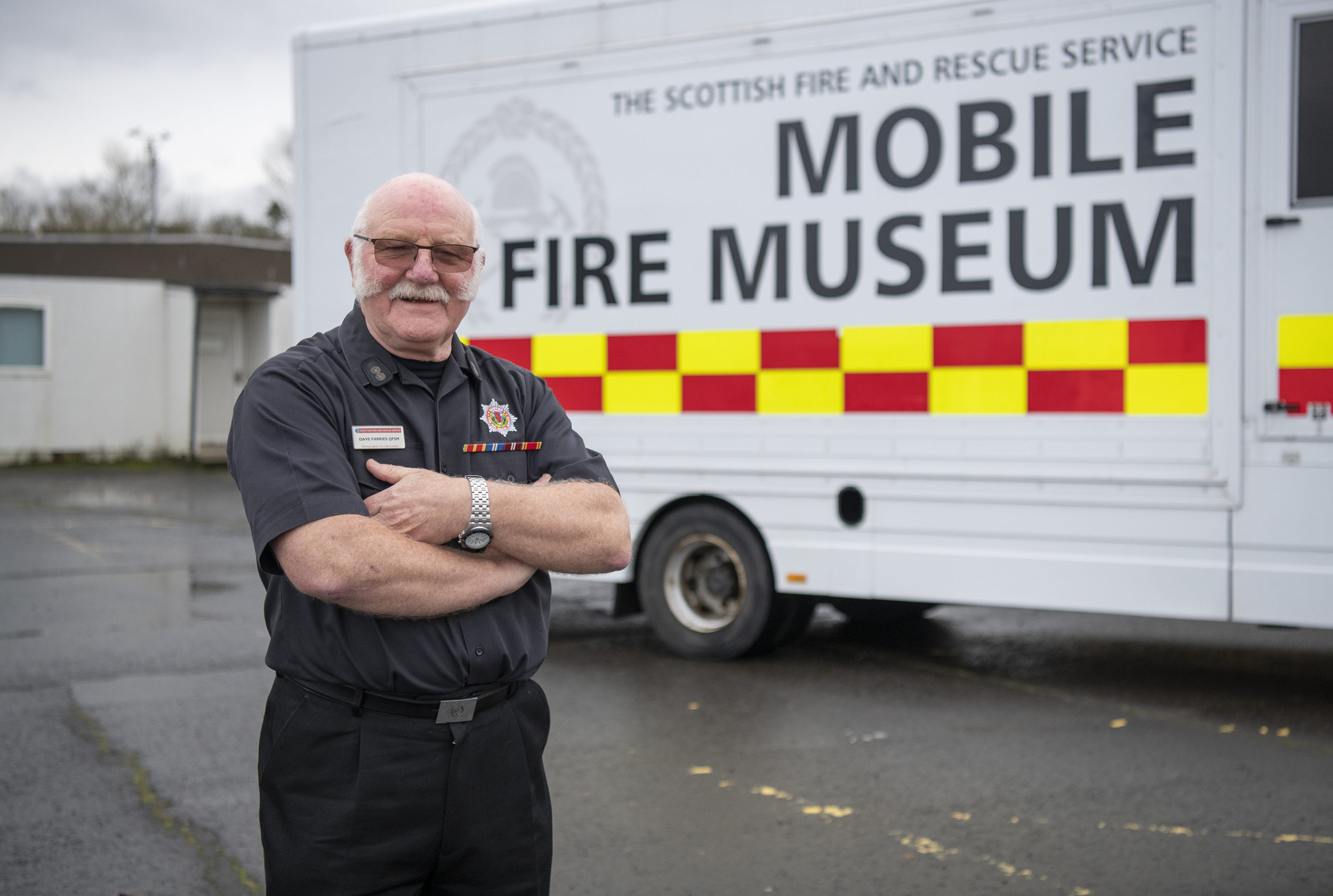 An Edinburgh-based Watch Commander – who is one the UK’s longest serving members of the fire and rescue service – is to have a fire appliance named in his honour.

The Scottish Fire and Rescue Service (SFRS) is naming its ‘Mobile Fire Museum’ after veteran firefighter Dave Farries, who began his career on the frontline more than 50 years ago.

Watch Commander Farries, 67, first joined the South Eastern Fire Brigade in August 1968 and has since worked as a firefighter, officer, instructor and investigator.

In 2016, he was integral in the creation and launch of the country’s first Mobile Fire Museum, which travels the nation educating communities about the rich heritage of firefighting in Scotland – and said the decision to bestow the vehicle in his name was the “ultimate accolade”.

He said: “This truly is something very special, and means a great deal to me and my family.

“I was asked recently by the Chief Officer how I would feel about an appliance being named after me. I was taken aback, and slightly embarrassed if I’m honest.

“I was humbled and over the moon to find out that it is to be the Mobile Museum, and that my name will be there long after me.

“I have thoroughly enjoyed my time, working alongside tireless colleagues and dedicated volunteers, in developing the Mobile Fire Museum to what it is today.

“This, for me, is the ultimate accolade. To the best of my knowledge, the naming of an appliance is not something awarded to many people within any fire and rescue service.

“Frankly, I don’t feel that I deserve this – I am just lucky to have been able to stay the course in a job that I love.”

The announcement was made at a recent SFRS recognition ceremony at Linlithgow Burgh Halls, when Dave was also awarded a certificate and statuette by Chief Officer Martin Blunden in recognition of his landmark 50-year service.

Originally from Hawick in the Scottish Borders and now living in Currie, Watch Commander Farries has served his entire career in and around Edinburgh and the east of Scotland, and has worked in all but one of the capital’s fire stations.

He was awarded the Queen’s Fire Service Medal at Holyrood Palace in 2014, and today splits his time between the Service’s East headquarters at Newbridge, a resource storage facility near Falkirk, and touring the Mobile Museum across Scotland.

Chief Officer Martin Blunden said: “I was incredibly proud to present Watch Commander Dave Farries with his Meritorious Service Certificate, in recognition of an incredible 50 years’ dedication to his community, to his country, and to the fire and rescue service in Scotland.

“Watch Commander Farries is a hugely respected figure within the Scottish Fire and Rescue Service – and indeed across the UK – and we are fortunate that so many colleagues have been able to benefit from his advice, knowledge and experience during his long and distinguished career.

“That he is now approaching his 52nd year of service, is quite remarkable. This is a truly fitting award, for an outstanding individual.”

Watch Commander Farries was joined by colleagues from across the East Service Delivery Area for the recognition ceremony at Linlithgow Burgh Halls to celebrate a combined service of more than 1,200 years.

He added: “I would like to pay tribute to our incredible and dedicated staff – they are the epitome of the Scottish Fire and Rescue Service spirit.