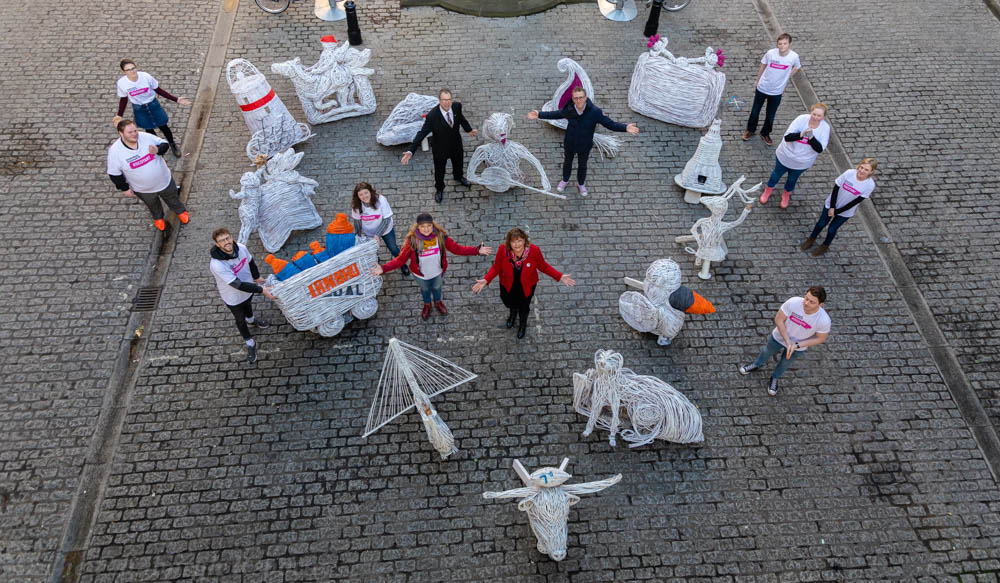 Young people across Scotland have been talking, debating and engaging with each other for months about what makes them proud of the region they call home and what one symbol best captures that pride through #ScotArt, the national youth engagement programme as part of Year of Young People 2018 finale during Edinburgh’s Hogmanay.

Over 300 young people have taken part in creative workshops led by #ScotArt Young Champions and emerging Young Artists from Shetland to the Borders to decide on the final 14 #ScotArt symbols which have been realised with assistance into incredible wicker sculptures by lead artist Ariel Killick.

December, after which they will come together to form the fiery heart of Scotland as outlined by thousands of torchbearers at the epic conclusion of Edinburgh’s Hogmanay Torchlight Procession on the 30th December, providing a suitably brilliant conclusion to Scotland’s Year of Young People 2018. #ScotArt Young Champions will also lead the Torchlight Procession, each carrying a banner emblazoned with their regional symbol, with an additional banner representing a 15th European symbol of pride being carried as chosen by young people from across Europe during a recent trip to Edinburgh.

On the symbol selected from young people in the Scottish Borders #ScotArt Champion Rebecca Tait said: “The symbol for the Scottish Borders was designed by fifteen young people from the region. We had so many fantastic ideas – from unicorns, to the Eildon Hills, to the Borders railway. We thought about lots of different categories as well, from food and drink, to iconic people to sport.”

“In the end the group voted the symbol they want to represent the Scottish Borders to be a Highland cow with a rugby 7s ball on his head. The Highland cow represents the farming industry in the Borders and the rugby 7s ball symbolises the famous rugby 7s tournaments that take place in each of the Borders towns every summer. The idea of rugby also fits in well with the well-known Borders Scotland rugby player, Stuart Hogg, who is from Hawick.”

On the symbol selected from young people in Edinburgh & the Lothians, #ScotArt Champions Tony Anderson & Chris Marshall said: “The symbol chosen to represent Edinburgh and the Lothians is Greyfriars Bobby guarding Arthur’s seat.

The young people had a few options on what symbol best represents their region including the three bridges (Forth, Rail and The Queensferry Crossing), but they decided that the story of Greyfriars Bobby and the beautiful landscape of Arthur’s Seat showed off the best of what we have here in Edinburgh and the Lothians.”

Cabinet Secretary for Culture, Tourism and External Affairs Fiona Hyslop, said: “Year of Young People 2018 has been an incredible celebration of our nation’s young people. Projects such as #ScotArt have created new and exciting opportunities for them to express their creativity, talents and views on a world-wide stage.”From the very start young people have been at the heart of everything we are doing with the Year of Young People. It is only right that they continue to be the beating heart of Scotland as we move into 2019.”

“The enthusiasm coming back has been brilliant – we’ve engaged 100s of young people from across Scotland and from a diverse range of backgrounds which is reflected in our incredible 14 sculptures, we’re going to showcase the best of young Scottish creative talent, putting young people front and centre of our celebration of the new year.”

“We’d encourage as many people to pop along to see the 14 amazing #ScotArt sculptures on Edinburgh’s Royal Mile until 29th December before they form the heart-shaped fiery finale of our much-loved Torchlight Procession on the 30th December.”

Councillor Donald Wilson, Culture and Communities Convener for the City of Edinburgh Council, said: “Where better to capture Scotland’s soul than right here in the heart of the Capital? This remarkable display will line the Royal Mile this Christmas in celebration of our young people, our shared culture and Edinburgh’s Hogmanay. The culmination of many months of workshops up and down the country, the wicker sculptures will be on show before they form the fiery conclusion of the Torchlight Procession on the night of 30 December.”

#ScotArt is supported by the Year of Young People event fund, which is run by EventScotland as part of VisitScotland’s directorate. The project is a partnership with Underbelly and Edinburgh Art Festival.Year of Young People 2018 is a celebration of Scotland’s incredible young people, while giving them a lounder platform for their voices to be heard.

Edinburgh’s Hogmanay is supported by City of Edinburgh Council, Scottish Government through the Edinburgh Festival’s Expo Fund, EventScotland International Events Programme and Scotland’s Winter Festivals Fund and the Year of Young People 2018 Events fund, all working together to create a bold new Hogmanay for Scotland.

The Final 15 #ScotArt Symbols per Region:

Central Scotland – TV set with thistles for an aerial

Highlands & The Islands – Stag in a kilt, highland dancing with a dram of Whisky in its hand

Borders – Highland cow with rugby 7s ball on its head