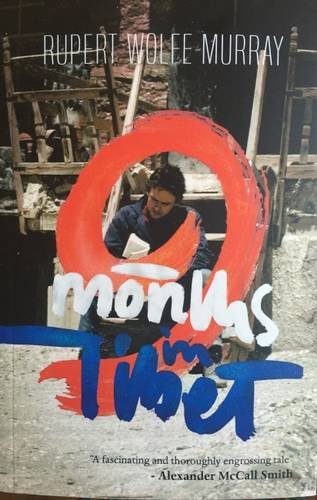 Gap years – they cost money, right? Your trip is organised by a company, your parents and granny feel obliged to chip in with large donations towards your ‘target’, you travel with a group, spend a couple of weeks building a latrine – then you swan off to enjoy yourself for a month or so, and, hey presto! You have something to put on your UCAS form, and plenty of stories with which to regale your new-found friends in Freshers’ Week.

Speaking to pupils at Edinburgh Steiner School, Rupert explains that what he’s interested in is independent travel. Not travel with your partner, not an ‘adventure’ organised by a well-insured company; independent travel means going it alone, travelling for months or even years, working as you go along. It means living from day to day, relying on your own resources, accepting whatever your journey brings. Rupert’s new book 9 Months in Tibet was originally called Hitching to Shanghai. He never got to Shanghai; did it matter? Not at all. As a child, Rupert was happy running around in the fields with his brothers beside their Inverness-shire home. He was not pleased when school came along, in fact he hated it and at the age of 5 ran away from home, stark naked. After several further attempts at formal education he eventually ended up at the Steiner School, but he didn’t like that much either;

Although he does have a degree from Liverpool University, Rupert was hopeless at languages – yet he is now fluent in German, Tibetan and Chinese. He was also terrified of independent travel – what if something went wrong? In his book, Rupert explains how he overcame that fear;  the many reasons people have for not travelling are, he says, all excuses. He had no money, few qualifications and no expertise, but he has now lived in Bosnia, Romania, India, Tibet and Austria. He’s painted frescos in Vienna, survived an earthquake in Lhasa, trekked  (‘the fancy word for walking’) in the Himalyas, beaten off stray dogs with a stick, fallen in love with numerous Italian women (‘romance does not go well with independent travel’) and been interrogated by rebel forces. The Tibetan trip all started when Rupert was travelling through Europe in 1986, heading for China. In Communist Hungary he met an American who recommended Tibet instead, and – not being one for advance planning – Rupert set off to hitchhike to Lhasa. Although there were few vehicles on the road most of them did stop, and Rupert eventually arrived in what he describes as one of the friendliest countries in the world. Tibetans – especially the older generation – proved to be both hospitable and generous, their lives informed by the Buddhist principles of helping and supporting others. Without such people, says Rupert, his journey would not have been possible.

When travelling, Rupert has four guidelines: observe, absorb, adapt and work. He purposely does very little research before he sets off, believing that too much information keeps the world at arm’s length; preconceptions hamper clear vision.

‘I travel into the unknown’

Observing comes naturally to him – he finds everything fascinating, and has the good storyteller’s ability to make everything equally fascinating for his audience. Rupert says he writes books to stop himself boring his friends with stories about his travels, but if today’s talk is anything to go by, there’s little chance of that.

Rupert’s off-the-wall observations are what makes his narrative so attractive; the smell of burning juniper branches as Tibetans make offerings to their gods; the ‘mini-roofs’ above all the windows of their houses to keep off the rain; the little outside curtains that protect those windows from dust. In the Tibetan highlands he sees a woman wearing a long leather coat with a strange bulge – a bulge that turns out to be the infant who plays in ‘the baby zone’ – the gap above her belt. In Lhasa, where prayer flags flutter in the wind, he notices how the flagstones of temples have been polished smooth by prostrate pilgrims. In the countryside he sees cattle fodder stored on top of houses, and cow pats drying on walls prior to being used to feed the fires (good fuel stores are essential to get families through winters when temperatures may drop to -30C.)

Adapting includes, for Rupert, learning a country’s language – and despite his ineptitude at school, learning ‘on the ground’ has turned out to be easy. He has few problems in settling wherever he is, and finds that sharing the local food – no matter how unattractive it may seem – is a great way to make friends. In Tibetan city markets he couldn’t quite bring himself to share his neighbours’ liking for chunks of raw yak meat, dining instead at fabulous – and fabulously cheap –  Chinese restaurants. In the country he ate tsampa (‘Westerners hate it, but after hillwalking it’s as invigorating as Red Bull’) and drank butter tea and barley beer or chang. The biggest culture shock was, in fact, returning to Scotland – he’s been back in the Borders for a few months now, but has no plans to put down permanent roots.

If Rupert starts to get attached to something, be it a possession or a person, he just lets it go, believing as Buddhists do that this is the only way to achieve true liberation. A Tibetan monk told him to appreciate every day as his last; he lives in the present and does not worry about the future; ‘I am happy now; that is all that matters’.

So how did Rupert fund his trip? In Tibet he struggled to find a job, but did eventually earn money by teaching English and helping to organise bus tours. Over the years he’s also worked on building sites, renovated orphanages, worked for aid agencies, taught himself journalism and project management and, of course, written books (he is also the author of two studies of the Bosnian peacekeeping process.)

Getting a job, he tells school leavers, not only helps to finance your travels – it also teaches you how to stick at something, and shows future employers that you can do just that. And the worse the job, the better; there’s nothing like drudgery for finding out about the world and what other people have to put up with every day of their lives. Although Rupert says his own diaries are ‘rubbish’, he still keeps them and advises other travellers to do the same – and then to write a book about their travels. Don’t worry about traditional publishing, says this son of the founders of Canongate; you’ll probably never get an agent, so do it yourself via the internet. He promoted 9 months in Tibet by going on a tour of northern Scotland on a Moulton foldable bike with a tent; he had no PR firm, no formal itinerary, no back-up – he raised a bit of money via Kickstarter then simply gave talks where he could, chatted to everyone he met, and managed to shift quite a few books, sometimes to the unlikeliest of people. And not being one to waste material, he’s now writing another book, this time about his tour of Scotland. There is one point on which Rupert is especially clear; schooldays are not the best days of your life. The further you are from the classroom, he says, the better life gets, and he recommends independent travel for anyone at any stage of their journey, whether it be a gap year, a mid-career change, or a new direction after retirement. The destination doesn’t matter; he doesn’t think Tibet’s worth visiting any more (it’s also now virtually impossible to enter the country except on an organised tour), and suggests India as a wonderful alternative, but says you can just as well travel in the Scottish Highlands, in Ireland, Wales or anywhere;

‘All you need are an open mind, a sense of trust and a thirst for discovering some of the mysteries in this world.’

Three qualities that Rupert Wolfe Murray has in abundance.

9 Months in Tibet (with a foreword by Alexander McCall Smith) is published by Scotland Street Press. It is available from Rupert Wolfe Murray on 0747 138 1973 or rupert@untold-stories.xyz and can also be purchased from Amazon, Blackwell’s and Waterstones.