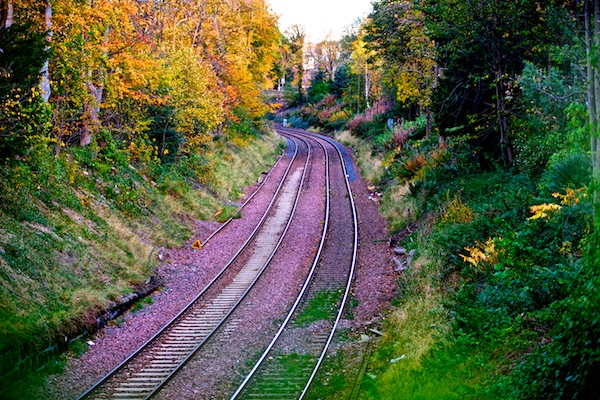 On Tuesday of this week Jim Eadie SNP MSP for Edinburgh Southern secured a debate on the reintroduction of the South Suburban Railway.

The railway line is already in existence but is only used for freight traffic. The motion before Parliament was to talk of the possibility of reinstating it for passenger use. As it was a members’ debate there was no question put to the Chamber, so this is just one way of highlighting the issue.

Here is a short video of a train travelling along it:

Jim Eadie mentioned the fact that the Edinburgh and South East Scotland City Deal, which is currently working towards an autumn sign off, mentions the fact that existing transport infrastructure needs to be upgraded. He also proposed that reinstatement of the line would bring economic and social benefits to Edinburgh.

During the members’ debate Mr Eadie said: “The south sub route has endless possibilities and potential. Reinstating the south sub could act as a catalyst for an integrated transport plan for Edinburgh that is truly fit for the 21st century. Our capital needs and deserves it.

“The station at Gorgie could serve Heart of Midlothian Football Club, Craiglockhart could serve Edinburgh Napier University, and Blackford and Newington could serve the University of Edinburgh. A new link to the Edinburgh Royal Infirmary that stems from the current south sub station at Cameron Toll would vastly improve the transport options for patients and national health service staff, and it would serve the ever-expanding Edinburgh BioQuarter.”

The MSP reminded Holyrood that three politicians who supported the plans organised a trip on the line with Lawrence Marshall of the Capital Rail Action Group in 2000. The three politicians were Margo MacDonald, David McLetchie and Robin Harper.

Eadie said: ” I cannot be alone in thinking what a fantastic journey that must have been, in the company of three of the best politicians that the Parliament has produced. Who knows whether their journey that day was on track or whether it went off the rails? I am pleased that the cross-party consensus that was alive that day has continued to the present day.” Sarah Boyack Labour MSP for Lothian said during the debate: “The south sub has never been the top priority; it has never been straightforward, as Jim Eadie outlined. I believe that it could be a game changer if we have a partnership with SEStran, look at the city deal options, bring the rail partners into play and look at the connections between tram, bus, rail and active travel.”

Cameron Buchanan Conservative MSP for Lothian urged that a feasibility study is conducted on the possibility of reinstating the line. He said: “I want to touch on a possible benefit of which my Conservative colleague Miles Briggs has been raising awareness; there is the potential for an Edinburgh south suburban railway to serve as a university line. As we have already heard, a fast link between the University of Edinburgh, Edinburgh Napier University and Queen Margaret University would be a great boost for our city’s students, staff, businesses and the wider higher education sector. To date, that has not been mentioned in cost-benefit debates around the ESSR, so we should certainly continue to raise awareness of that positive aspect in partnership with the relevant stakeholders. As we have heard, that is a rather new line to take.”

Most who spoke in the debate agreed that this is an idea whose time has come, and Green MSP for Lothian Alison Johnstone was one of those. She said that she has visited Morningside Station not too long ago. She commented: ” I am Edinburgh born and bred—I have spent my life in the city—and there is no doubt in my mind that it is becoming increasingly gridlocked, so we must look at opportunities and alternatives. We must also consider issues including climate change, which affects us daily.”

The Transport Minister Derek Mackay already has his hands a little full at the moment with the closure of the Forth Road Bridge but he spoke in the debate to say that he would happily have a meeting with Jim Eadie but would also require the City of Edinburgh Council Leader Andrew Burns to be at that meeting.

The Minister also said that there are many calling for investment in the railways across the country because it is more sustainable.

Although the Minister thought he did not have sufficient time left in the allotted slot to answer Stewart Stevenson MSP who thought he had the answer to cutting the cost, the Presiding Officer was prepared to allow him as long as he wished.

Mr Stevenson explained: “…the ingenious engineering solution that was associated with electrification on the Paisley Canal railway line where the price was brought down to about a third of the original budget by putting in a dead section that was unpowered. Does the Minister agree that there is a lot of great engineering out there waiting to be applied to getting the price of some of our infrastructure developments down to affordable levels, although it is not in and of itself a magic wand?”

The Minister concluded that he would need commitment from Sestrans and The City of Edinburgh Council that this was a priority issue for them, but that given the points which  Jim Eadie had raised he would be  happy to pursue it further.

Well what do you think about the South Suburban Railway? Would it be a good idea?